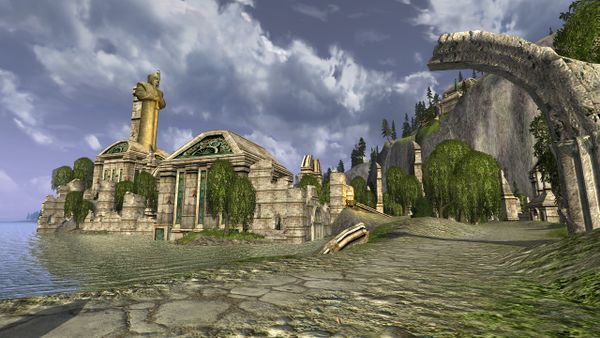 Men Erain is an area within Evendim.

Men Erain, or the "Way of Kings" as it reads in Westernesse, is found south of Baranduin and along the southeastern shores of Lake Evendim down to Annúminas; the mountain ridge separates if from Barandalf. At each side of the worn road lie the tombs of ancient High Kings, and a few other ruins. At the mountainside a few estates remain, memories of when the Kingdom of Arnor eclipsed, a history hallowed by the Dúnedain.

At an islet at the northern end of all tombs is a Ranger camp located. That camp provides a Dock-master for swift cruises over the lake, and a long quest-chain. The closest service centres are High King's Crossing, Tinnudir, and Echad Garthadir within Annúminas.

The tombs along the sides of the Way if Kings give history flashbacks about the kings from when Elendil founded Annúminas until Arnor was split in three. Eventually visitors are sent into the eye of the storm, the centre of Annúminas which is overrun by Angmarim and their giant pets.

Note: The genealogy of all related kings is found on their wiki-pages respectively. 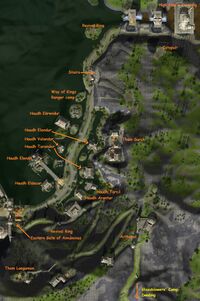 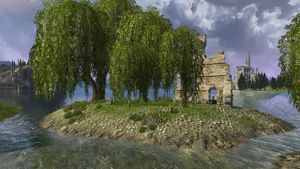 Way of Kings, the Ranger camp 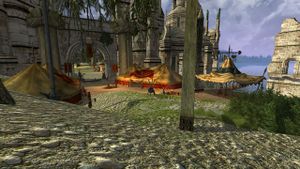 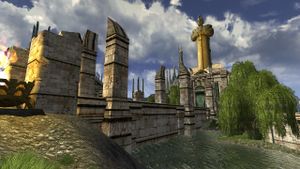 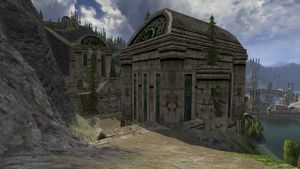 "After the fashion of ancient Númenor, the Men of Arnor revered their dead almost more than they did the living. Great tombs were erected for their kings in a place called Men Erain. Of the ten kings of Arnor, only seven were interred at Men Erain, for Valandil son of Isildur was buried beneath Annúminas, Elendil at Halifirien far to the south – though a tomb was erected for him in memorial at Men Erain – and Isildur, his son, was never recovered from Anduin.

"Those who lie at rest at Men Erain are the heirs of Isildur in the line of Valandil: Eldacar, Arantar, Tarcil, Tarondor, Valandur, Elendur, and Eärendur, whose son Amlaith removed to Fornost as the first king of Arthedain. For many long years these tombs remained undisturbed, but after the fall of the North-kingdom to the Witch-king of Angmar, tomb-robbers and thieves came to Evendim. It is unknown if any of the treasures buried with the kings still remain, but the Rangers of the North have maintained their vigil over the tombs." — lorebook