Gandalf is one particularly eminent character in Tolkien's works, introduced as a renowned wizard long since already in The Hobbit and having a central role in the War of the Ring. He is well known among all races as he in turn values them highly for their respective merits. Thus, Gandalf carries many names: "Mithrandir" to Elves, "Incánus" to Men of the South, and "Tharkûn" to Dwarves.

Gandalf is a Maia of Manwë and his true name is "Olórin". Sent along with four others (Curumo, Aiwendil, Alatar, and Pallando) to Middle-earth to fight Sauron, he was chosen by Manwë himself for his humility and compassion. Gandalf is known for his mastery of fire, and bears Narya, the elven ring of Fire. Of the Five Istari (wizards) Gandalf alone was loyal to his task, and was instrumental in Sauron's defeat.

J. R. R. Tolkien introduces Gandalf already in The Hobbit when he visits Bilbo Baggins in Bag End and it soon is clear that Gandalf had set foot in the Shire long since and astounded the friendly hobbits with his magic fireworks. From before that and on Gandalf continues to be the mage that vanishes from throngs and fellowships, only to appear in great straits to rescue his friends once again.

In Lotro, dwarves meet Gandalf already in the introduction sequence and other races find him in Bree, an odd wizard with peculiar comments. He listens to all and thus he gathers information far beyond what his enemies may fathom, leading to their future destruction. Though Saruman is the leader of the five, he envies Gandalf's virtues in getting to understand the folks of Middle-earth and his ability to obtain their ears and trust; however, Saruman exaggerates Gandalf's ability of foreseeing, thus undermining himself. Players can encounter Gandalf in many regions: Bree, Ered Luin, The Shire, Trollshaws, Lothlorien, Rohan, Gondor, Mordor, and Erebor.

"Also known as the "Grey Wizard" (his Sindarin name Mithrandir means "Grey Pilgrim"), Gandalf is perhaps Middle-earth's best-known inhabitant. Although he sometimes appears to be old and frail, Gandalf the Grey is actually one of the most powerful allies of the good folk of Middle-earth and a guide to the Free Peoples in their struggle against the darkness. In addition to being a powerful wizard, Gandalf wields Glamdring, the "Foe-hammer", a magical elven-sword forged in the First Age and greatly feared by the creatures of evil. Calling no land his home, he is friend to many, especially hobbits, and revered by elves. Since he is often at the center of world-changing events, he is also feared by many as an omen of difficult times ahead.

"Gandalf serves as a wise leader in Lotro, rarely seen, but always guiding events through his dealings. Players will often hear mention of Gandalf in the lands between Bree and Rivendell and may occasionally cross his path, since his activities in these early days of the War of the Ring serve to guide not only the quest to destroy the One Ring, but also the heroic activities of all the adventurers who seek to stand against evil." — (quote from the Lorebook entry, prior to the Lorebook being removed from service) 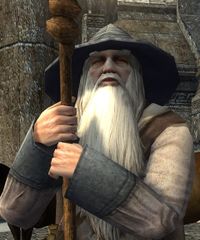 Gandalf at the Prancing Pony

Gandalf's main location is inside Bilbo's Room in Rivendell. He also appears elsewhere and in quest instances:

The Black Book of Mordor:

"Frodo is a most remarkable hobbit. He will be fine."
"Adventurers are a curious sort. As curious as Wizards, if you ask most hobbits!"
"We are safe for the present, but soon we will be thrust again into danger."
"No one can see all of the roads that lie before us."
"If the Rohirrim do not come to the aid of Gondor, Minas Tirith will fall. There is little time left!."