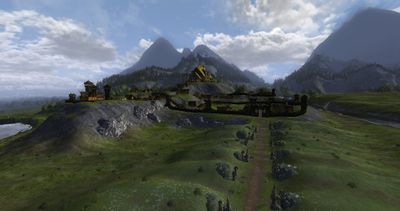 Approaching Edoras along the road through the Barrowfield

Edoras is a settlement located within the area of Kingstead in West Rohan. [60.8S, 74.2W]

The city was built on a hill just outside the valley called Harrowdale which lay under the great mountain Starkhorn.

This valley was formed by the River Snowbourn's rise in the White Mountains. Underharrow guarded the mouth of the valley, the sanctuary of Dunharrow and the Paths of the Dead behind it.

The river Snowbourn flowed past Edoras on its way west to meet with the River Entwash at Snowbourn.

Edoras was encircled by a wall, and a dike dug around the hill.

Lining the road approaching Edoras from the South was the Barrowfield, the tombs of the Rulers of Rohan arrayed in two lines. Simbelmyne grew there. 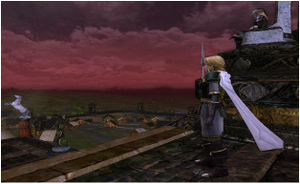 The view from the top of Edoras 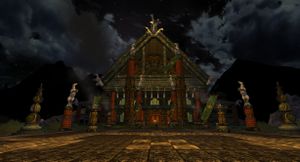 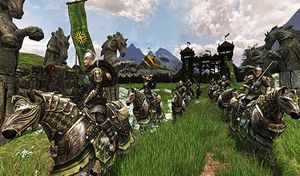 The Rohirrim ride forth from Edoras 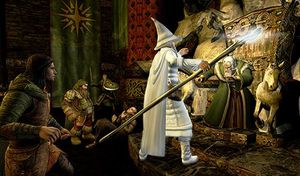 Edoras is the capital of Rohan. The king of the Rohirrim takes residence here.

We first visit Edoras in:

We return to Edoras in Volume III, Book 11: The Golden Hall - Chapter 1. (Details below)

The following services can be found within the settlement of Edoras:

The initial quests within Edoras proper are part of the Epic Quest line "Vol. III. Book 11: The Golden Hall."

After completing Category: Entwade Quests, you are again in Edoras with Éowyn. At which point she offers you three quests:

you can follow that quest to Harrowdale or one of the other vector quests to other areas (Middlemead, Eastfold and Broadacres).

From Gandalf: (standing near the Fountain (Milestone) in the Entrance Courtyard)

Notes: - linking quests - send you to see Gandalf in Edoras