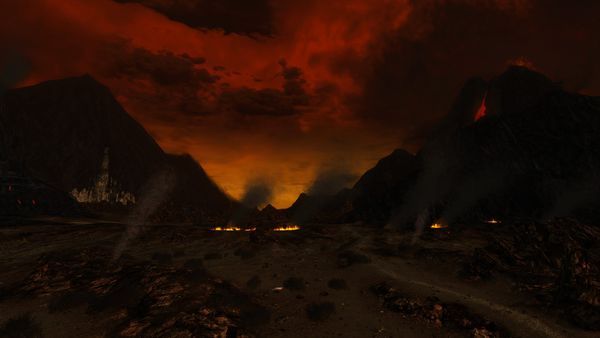 Dor Amarth (Sindarin for Doomfold, literally Land of Fate), is an area within the Plateau of Gorgoroth. It lies between Orodruin, Mount Doom, to the south and the Ered Lithui, the Ash Mountains, to the north.

This rocky plain within Mordor holds the broken bones of Barad-dûr. The eruption of Mount Doom has led to the break in the plateau of Gorgoroth. What was once a vast battlefield and mustering plain under Sauron's control has now become a dangerous field of volcanic jets, crevasses, quake-lines and sinkholes. Loyal Orcs and Men still stand guard over the ruins of Barad-dûr, hoping that the Dark Lord will eventually come and return in glory and lead them once more. Many Easterlings and Haradrim also stay to pillage the spoils of these lands as payment for the rewards promised by Sauron.

Dor Amarth held the capital of Sauron's realm, and is connected to all other major areas of the Plateau. To the north-west are the roads to the Isenmouthe, beyond which lies Udûn, and Durthang, the road to which runs west through the Morgai into Lhingris. West of Orodruin goes the road to Talath Úrui, the Burning Plain, while to the south-east, south of Barad-dûr and the remains of Iant Ruin, lies the pestilent vale of Agarnaith. Though much of the road winding around Mount Doom has been destroyed in the eruption, the northern face of the mountain can still be climbed by way of a winding path that precariously bridges the lava-streams.

The Conquest of Gorgoroth has established a camp at the Ruins of Díngarth, near the Isenmouthe. The Dwarves of Mordor, the Stout-axes, inhabit the Flaming Spire of Lûghash, at the base of the Ered Lithui.

There are several places in the fire fields where lava flows have divided up the landscape and require long, wide detours to get around them. But if you know where the bridges over the lava are located it makes travel much easier.

In the Fire Fields

These landmarks are located within Dor Amarth: 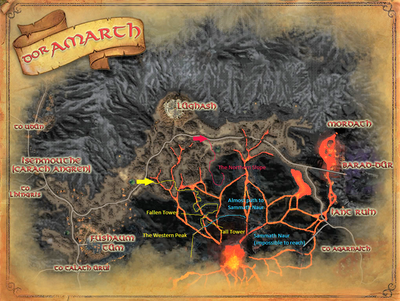 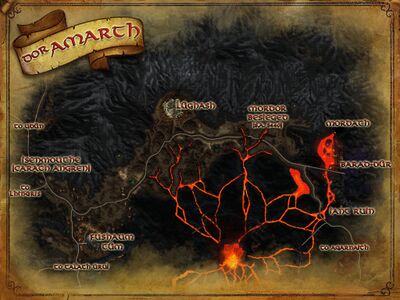 This land is named Dor Amarth by the Men of Gondor, rendered in the Common Speech as the Doomfold.[1] It comprises much of the northern side of the Plateau of Gorgoroth. As the site of Barad-dûr, under the north face of Orodruin, Dor Amarth likely saw much of the fighting during the War of the Last Alliance. After Sauron's defeat in that war, Barad-dûr was razed, but its foundations were sustained by the continued existence of the One Ring and could not be unmade.[2] Hidden within the Mordath, slaves mined the Ered Lithui in preparation for their lord's eventual return.[3]

After their victory, the Gondorians built many fortresses and watchtowers to support their occupation of Mordor.[4] Among these was Sídhost, the Peace-hold, built on the Ash Mountains' lower slopes to oversee Orodruin. Sídhost was eventually abandoned, and the remaining Gondorians gradually withdrew or were killed until Sauron's servants controlled Mordor in his absence. Sídhost was rebuilt as Lûghash, the Flaming Spire.[4][5] However, it was not until T.A. 2951, ten years after being driven from Dol Guldur, that Sauron publicly returned to Mordor and began the reconstruction of his Dark Tower.[6] When he returned, he destroyed the kingdom of the Stout-axe Dwarves in Mordor and imprisoned their king, Váskmun Greytooth. The Stout-axes had nowhere left to go but to live in Lûghash as servants of Zôreth.[7]

In Sauron's ultimate defeat, his tower could not support itself and collapsed, laying the Abyss of Mordath open to the world above. The base of the tower survives, however, and though Sauron is gone, the impression of his evil lingers in Barad-dûr, the Abyss of Mordath, and the surrounding lands. This corruption can induce madness in those who cannot resist it.[8] Many Black Númenóreans who were in Sauron's service still inhabit the remains of the Tower, however. Among these are the Order of the Eye, a cult of those who believe the Dark Lord will return yet again, and seek to gather the artifacts that were scattered in the Tower's collapse.[9] Dulgabêth the Black Word, the former Mouth of Sauron, now titles himself Sauron's Heir, and operates out of Barad-dûr while attempting to cement his position as Mordor's regent.[10]