This page is about the instance. For the nearby Hobbit market, see Northcotton Market. 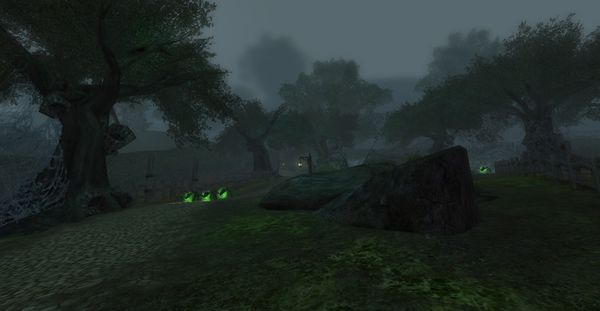 Several hobbits have disappeared recently in the vicinity of the Northcotton Farm. It was abandoned years ago, but something stirs within its grounds and a faint, sweet aroma wafts over the walls...

The entrance for the instance is just next to the peaceful Northcotton Market. 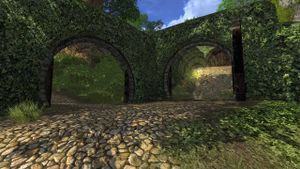 This instance is all about poison effects, although most of the poisons which will hurt you are clouds or auras which can't be dispelled, only moved out of. Poison resistance (e.g. fortifying food) could help.

A general comment on the instance is that if you deal with the special abilities of the bosses, stay out of poison clouds and remove corruptions on the trash then it is very possible to do this instance without a primary healer. A captain, lore-master or burglar (with green FMs) along with morale potions can easily keep up with what minimal damage you will take from regular attacks if you have a decently built tank.

The trash mob pulls in the instance are very manageable. They typically come in groups of 3 or 4 and will not give much any trouble.

The tank should start this fight by grabbing aggro and then running to the back wall since Legbarthil shoots a poison cloud immediately after. The animation for the poison cloud looks like a white line spit attack towards the tank. Be aware of this animation the whole fight so you'll be able to move away from new clouds before they appear.

The same animation is used to root players who don't have aggro. If a player gets rooted, pull Legbarthil away so that that player doesn't get stuck in the poison cloud that Legbarthil shoots soon after. The tank should also try to tank away from the ranged players so that they don't have to move much during the fight.

Legbarthil will lay three egg sacs during the fight at set morale thresholds (approximately 80%, 45% and 15%) which need to be killed quickly or they hatch three spiderlings that, if they reach her, will heal Legbarthil for about 10k each. The tank should run away from the boss as soon as she starts the animation so that a poison cloud won't be dropped on the egg. If spiders start moving toward the boss you can stun them to disrupt the heal, and try to kill them quickly.

This version of Thadúr has more morale/power than in the Great Barrow but he is only an Elite Master instead of a Nemesis. He will call out one of several things periodically throughout the fight:

It is recommended that all party members group up close to Thadúr, with the tank in front and the other two party members right behind. This means you will not need to move at all for the "divided you shall fall" attack. The tank can simply run through Thadúr when he does his frontal "face me" attack. As the fight goes on, these effects will come more frequently and can come on top of each other. Watch out for a combination of the "dark thorn" and "divided you shall fall" effects as you might be running away from the thorn effect when you need to be grouping up. If you have a primary healer in your group, you can probably sit through the dark thorn poison cloud if you want to make the fight a bit less chaotic (it's not as damaging as the spider boss cloud).

An optional strategy is to have ranged players stand back out of range of the "divided you shall fall" attack for the whole fight, keeping Thadúr's back toward them at all times. Melee classes will take more damage, a trade-off for fewer players to heal.

When Thadúr's morale gets low enough he will retreat, and you will have to backtrack to a previously locked door about halfway though the instance to reach the final encounter.

Thadúr is up on a rickety wood tower with Úmheryn (a vile cauldron) in which Thadúr is brewing a poison to put into the Shire's water supply. There are four elements to this fight:

Once you destroy the cauldron, Thadúr descends and you can finally finish him off.

On tier 1, the damage done by the trash and bosses is less. You also have longer to take down the cauldron and Thadúr has fewer special attacks and will use them less often.

Challenge Mode: Don't use buckets on the cauldron. Also, the hobbits will run quickly toward the poison pies instead of walking slowly.