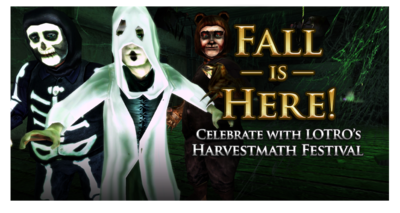 Leaves are turning colours, the air is growing crisp, tricks and treats are ready, and in Middle-earth that means - Harvestmath is here! This year the festival is back and better than ever before. Become a Patron of the Festival and join the fun with new quests, new deeds, and new rewards. Plus, journey beneath the Party Tree and discover the Haunted Burrow. Don't miss out on the spookiest party of the year!

The Haunted Burrow is a spooky, fun-filled house of scary sights and sounds. It is only available during the Harvest Festival and accessible after completing the short quest series starting with A Cellar Door Appears and ending with The Haunted Burrow. Along with daily quests which reward Fall Festival Tokens, there are many other hidden surprises to be found within!

Try your hand at games such as Geode-hunting, Scroll-grabbing, Apple Bobbing & Pumpkin Picking. You can participate in each mini-game once each hour.

Troves and Trickery are quests available during the Harvest Festival with the aim of provoking certain NPCs using appropriate emotes on them. The rewards for these quests include festival mask tokens which are different for each location. For instance, a reward for Troves and Trickery -- Thorin's Hall is a Dwarf Mask Token which can be turned in for a Bucket Festival Mask.

The Inn League and The Ale Association are looking for a few good drinkers to cause mischief at the smug inns of the realm. Raise a mug and check out the available quests and rewards!

In addition to these regular seasonal quests, the Inn League is looking for some vintage wine in the Haunted Burrow and the Ale Association wants to play tricks on some of the already scared hobbits.

Fall Festival Traders are found at:

Barterer: Sawlo Puddifoot (The Party Tree in the Shire)