From Lotro-Wiki.com
(Redirected from Greyflood)
Jump to navigation Jump to search 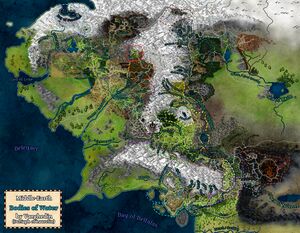 The river Gwathló, widely known to the race of Men as the Greyflood, is a river in middle Eriador. Although the river itself is not yet in-game, its two main tributaries, the Hoarwell and the Loudwater, both are.

The Sindarin name Gwathló was adapted from the name Gwathir, given to the river by the Númenóreans in the Second Age. Its name translates as Shadowy River, and was given because over all its length it flowed through immense forests which covered Minhiriath to the north and Enedwaith to the south. It was one of the few rivers also given an Adûnaic name: Agathurush.

The Gwathló was wide enough that it could be sailed on all the way to where its tributary Glanduin met the river. Its was formed where the Mitheithel or Hoarwell met the Glanduin, where a marshy area known as Nîn-in-Eilph or Swanfleet was formed.

When the Númenórean Ship Kings required more and more wood to build their ships, they set up a haven-fortress on the Gwathló called Lond Daer or Lond Daer Enedh, Great (Middle) Haven. From there the lands were rapidly deforested, and by the Third Age all the forests were gone.

In the late Second Age and early Third Age the Gwathló formed the border between the Kingdoms of Arnor and Gondor, and the great Gondorian northern outpost of Tharbad was built where the Great South Road crossed the river at its only crossing in the lower stream. However by the late Third Age Gondor had retreated far south and Arnor had been destroyed. Tharbad and its great bridge had been abandoned and ruined, and the river had to be crossed by the ruins of Tharbad in a dangerous ford.