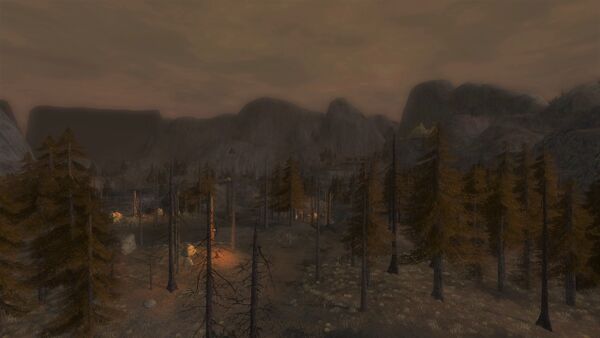 Dol Dínen (Sindarin for Silent Hill) is an area within North Downs, in the south-east.

West of the stone-trolls of Taur Gonwaith and south of Rhunenlad this coy corner of the North Downs hides some leaders of Angmar. Mainly the Ongbúrz Tribe but also goblins, and wargs, have established a large war-camp here. Up the hill-side lies Hîsuk, an even stronger camp with enemies that are fiercely guarding the Hillmen stronghold of Tûmat.

This area provides no services whatsoever. It is the target of quests and raids of the Rangers who need to thin the numbers of enemies and behead their leaders. There are many landscape quests and they are aimed at level 30, meant for fellowships.

The skirmish Attack at Dawn unfolds at Tûmat. 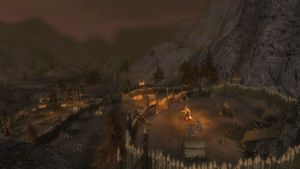 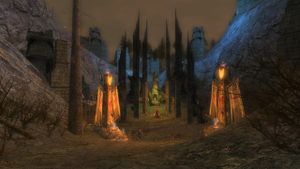 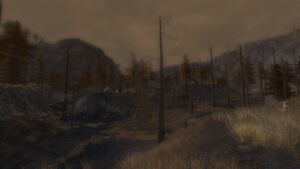 The barren fields of Dol Dínen 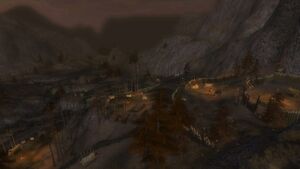 The Orc encampment seen from above

"Dol Dínen used to be a quiet and peaceful valley in south-eastern Arthedain, far away from wars and skirmishes. But the new invasion of the North Downs has already begun. A vanguard of Orcs and Trolls passed through the eastern Ram Dúath, supported by the Hillmen. They marched without fear through the woods and hills of Nan Amlug, past Rhunenlad, and into Dol Dínen and Nan Wathren, stamping a new road as they went. This path, marked by emblems of Angmar and watched by Wargs, links the mustering camps of Dol Dínen with their supreme commanders in Angmar.

"Once a thickly forested knot of grassy foothills, Dol Dínen is now a cradle of war. The trees have been cut down to make war machines. Profane shrines to the Enemy defile the ground. Flayed and ravenous Wargs roam the hills. Behold the Witch-king’s vision for Eriador.

"Three tribes of Orcs make up the bulk of Angmar’s armies in the North Downs. Led by two vile generals, these tribes spread out across the region in search of supplies and position. The Tarkrîp ("Man-flayers") muster in Nan Wathren. The Blogmal slipped into Fornost to levy their own forces. The Ongbúrz prepare their Trolls and war engines in Dol Dínen.

"The Rangers of Esteldín dispatch brave souls into the burnt landscape of Dol Dínen to slay Orc-defilers and sabotage the war-machines of Angmar. But the malice of Angmar afflicts even its own. Sneak into the camps of Dol Dínen and you overhear the Ongbúrz sorcerers saying, "Let the Tarkrîp wage their war. Their victory is fleeting." For now, the Orc tribes still rival against each other. Their tenuous alliances must be undermined now before they unite in full-on invasion." — Hero's guide