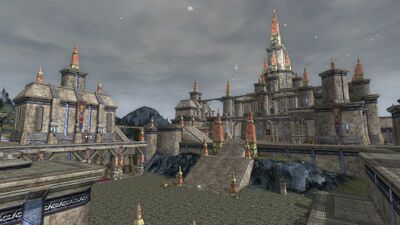 The Siege of Gondamon is a Skirmish which takes place in the Dwarven fortress of Gondamon. Skirmishes can be accessed using the Instance Finder.

Gondamon is one of the strongest fortresses of the Longbeards in Ered Luin along the Blue Mountains. The Dourhands and their goblin-allies seek to overthrow the stronghold and claim it for themselves. In The Siege of Gondamon, the Dourhands have forged an alliance with the Blue Crag goblins and have laid siege to Gondamon for nearly two weeks. You enter during the final assault.

The instance starts when you report to Mathi, commander of Gondamon. Follow his instructions. The instance will have you running to three defense points (North, West and South) as the fortress gates are attacked by small bands.

The final assault occurs at the top of the stairs with Mathi. The final boss Ingithor Blackhand and his minions cheat and drops off the South wall of the fortress directly into the upper courtyard of Gondamon with Mathi. After all creatures are dead and the flag is raised, you can loot either the boss corpse or the chest.

On 12-player difficulty two Nethgarch appear along with Ingithor Blackhand.

Competing the skirmish will reward Thorin's Hall Reputation. Rewards and Loot scale to the level, group size, and tier of the Skirmish. Loot is found by/at/in/from:

For by level and tier details see Skirmish Rewards