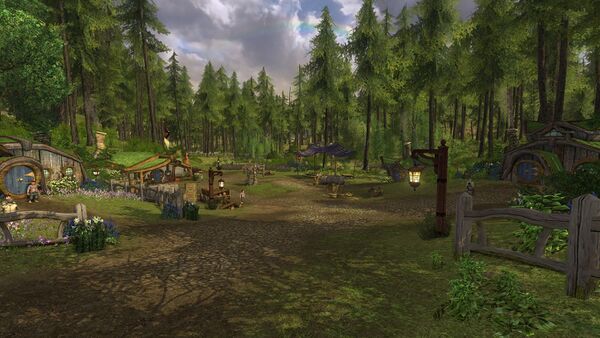 Overhill is a settlement located within the area of Bindbole Wood, in the Shire. [28.2S, 70.1W]

This small village in the woods marks the end of the short road that runs past the Hill from Tookland. However, a trail continues east through the forest to Brockenborings and beyond. The Hobbits living here are chiefly occupied as wood-workers at the nearby Overhill Yards, and with making charcoal. 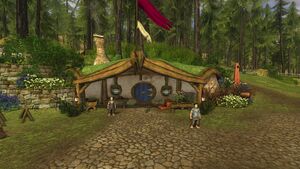 Sam at the Green Dragon in Bywater: "But what about these Tree-men, these giants, as you might call them? They do say that one bigger than a tree was seen up away beyond the North Moors not long back."
Ted: "Who's they?"
"My cousin Hal for one. He works for Mr. Boffin at Overhill and goes up to the Northfarthing for the hunting. He saw one."
"Says he did, perhaps. Your Hal's always saying he's seen things; and maybe he sees things that ain't there."
"But this one was as big as an elm tree, and walking - walking seven yards to a stride, if it was an inch."
"Then I bet it wasn't an inch. What he saw was an elm tree, as like as not."
"But this one was walking, I tell you; and there ain't no elm tree on the North Moors," said Sam. — The Fellowship of the Ring, by Tolkien