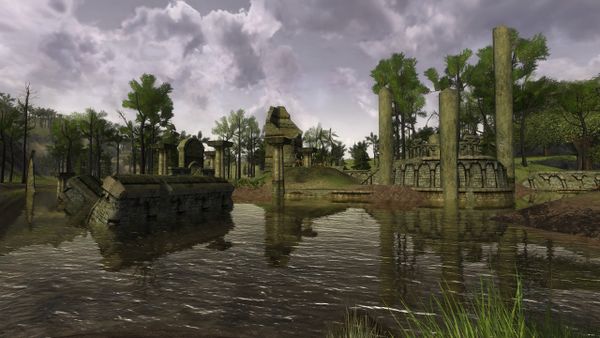 In the southern reaches of Meluinen, at the shore of lake Nen Harn, this once was a thriving town known as Ost Ardúlin. Possibly commerce with Bree-folk and even the Lone-lands took place here using boats; and yet today it is possible to travel by the eastern shore of Nen Harn to reach Far Chetwood and the Weather Hills beyond. Here is one of the Founding Stones of Arthedain's Five Towns located.

Following the fall of Dol Nendír, the town of Merenost was defenceless against the Witch King. The town was sacked fairly quickly before reinforcements from Nan Wathren could arrive. Currently, it is occupied by a group of Ongbúrz who are corrupting and twisting the glade of Meluinen. 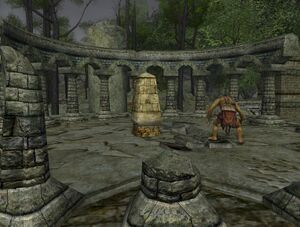 The Founding Stone of Ost Ardúlin

These deeds can be advanced by exploring Merenost:

Merenost was once a small, walled town of the North-realm of Arnor long before the marshes of Meluinen swallowed the land. — Deed

Though most of the writing has been destroyed, you can discern the words 'Ost Ardúlin' at the top of the monument, and at the bottom the phrase, 'that we might retreat from our cares, and take solace in such beauty.' — Quest