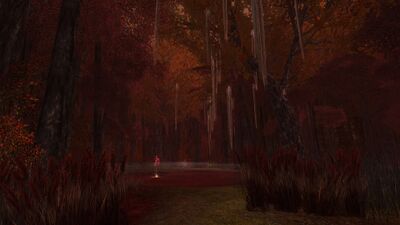 Garth Agarwen: Arboretum is a World Instance within Garth Agarwen, in the Lone-lands. [29.2S, 24.8W]

“Once a lush garden the Arboretum's caretaker, Grimbark, was driven mad when the Red-maid fell to corruption. Now, Grimbark forces all vestige of uncorrupted life from the Arboretum making it a welcome home for The Dead.”

The Arboretum is an instance that can be found within Garth Agarwen in the south-west side of the courtyard where Temair the Devoted is located. The Arboretum can also be entered via the Instance Join panel.

This instance begins with a clearing where the only way appears to be to the left. However, while you can slay the first group, it is not advised that you continue further because Rot-heart is patrolling. Rot-heart is an elite master, and patrols in the large circle around the instance entrance, and interior. Waiting for Rot-heart to come may be slow, but it is better than him jumping in mid-combat.

After Rot-heart's defeat you can begin exploring. You can in-fact go directly forward. From what appears to be a bush, when approached "springs up" to reveal that these are normal trees. Going straight leads to a large clearing, reaching all the way to the southern end of the instance. Fighting through this clearing is a dead end, but it does have one of the three tombs mentioned in the key locations objective. Taking a left in the clearing is another "bush-tree" incident, which will lead you to some pillars. Around these pillars near the clearing is another tomb, and on the other side is a chest. After this leads to another "bush-tree" action, to a straight away. Taking a left will lead you back to the beginning, completing the circle.

Now at the entrance, again, go back to the straight away mentioned before. This straight-away, is all lot like the clearing before, but passages are blocked by the trees (which will become passable when you approach). There are a total of 4 passage ways here: one leading to the pillar room; another one right next to it leading to the memorial in the optional objectives; one more on the opposite side of the straightaway leading to the stone; and the last one on the south end of the straightaway. After exploring these as you like, go to the south one, which is under the structure which used to be the bridge to the Fortress (in olden days). This is a rather straight path, which contains the last tomb within. After which will finally lead to Grimbark, in which you must not defeat the beehives in order to complete the challenge. 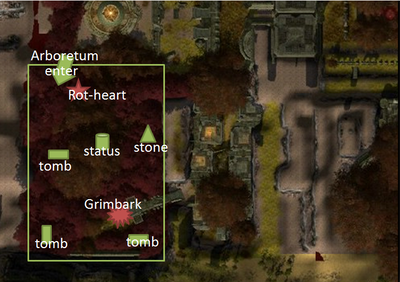