This page is about the reputation faction. For the Title, see Enmity of Fushaum Bal South. 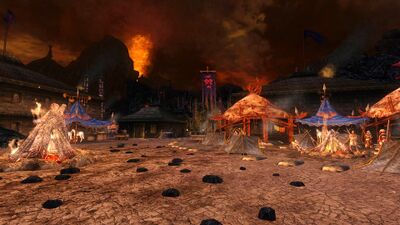 Enmity of Fushaum Bal south is a reputation faction in the Talath Úrui area of the Plateau of Gorgoroth.

Led by Thâng the Knife, Haradrim bandit chief, and Mâlatuk the Hammer, Sûhalar warlord, the town-sized, well-ordered settlement of Fushaum Bal has become a lawless haven for survivors of the devastation of Gorgoroth.

The followers of Thâng, the Knife and Mâlatuk, the Hammer control Fushaum Bal South, having been driven from Fushaum Bal North by Khirgi, the Hunter. Still they push back against the men of Fushaum Bal North, so that they may plunder the spoils they feel Sauron owes them. The faction is called "Enmity" because it is not possible to gain standing greater than Neutral with this faction. There are no rewards for this faction; its only point is to advance the quest The Fushaum Resolution. They are opposed to the faction Enmity of Fushaum Bal north and most positive reputation with one faction comes with negative reputation for the other.

The leaders of Fushaum Bal South can be found at the deepest end of the town:

Thâng, the Knife and Mâlatuk, the Hammer offer repeatable quests to build reputation (only before The Fushaum Resolution is completed):

Defeating enemies and destroying watchtowers in Fushaum Bal North bestows repeatable quests to build reputation (only before The Fushaum Resolution is completed):