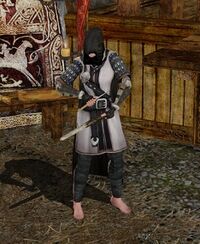 "As any archer will tell you, it takes more than a stick and a string to make a worthy weapon. The woodworker is an expert bowyer, but expands his trade to include staves, spears, and other hafted weapons. A master Woodworker can produce weapons that even an elven hero would be proud to wield on the battlefield."

Woodworking is the art of carving and whittling weapons from wood. A Woodworker can produce stout clubs, hammers, staves, and spears for melee use, as well as ranged weapons such as bows, crossbows, and javelins and Instruments for the Minstrel, such as clarinets, drums, harps, flutes, lutes, and theorbos. When he has honed his skills enough, the Woodworker can even produce Legendary Items that any hero would be proud to wield.

In his spare time, a woodworker may also whittle horns for use by the Champion, banner crests to inspire the Captain's herald, and intricate shield carvings to empower the Warden, or he can carve Warden battle-hymns and inscribe Rune-keeper parchments. The woodworker can also craft furniture for the home and fishing poles.

A guide to attaining Woodworker Mastery

A list of all component items that are used to craft Woodworker recipes: Woodworker Components

A Woodworker primarily crafts with treated wood produced by a Forester and Crafting Rare Components.

To critically succeed while crafting item, a Woodworker must have achieved proficiency in the crafting tier for that item. After gaining proficiency, the base chance to achieve critical success is 5%.

A complete list of Woodworker recipe indexes by tier:

An index of items that can be crafted using Woodworker recipes

Woodworkers of all levels are eligible to join the Woodworker's Guild, but the guild recipes require Expert tier and above. To join a crafting guild one must first speak to a Master of Crafting Guilds, and they are always found in the vicinity of a guild hall and at many other locations. NOTE: since Update 27, players may find the guild NPCs located in the House of Craft in Minas Tirith (Midsummer) [23.2N, 54.9W] to be preferable to Esteldín, particularly for characters with the Armsman vocation, since their second guildable profession -- Weaponsmith -- can also be guilded in the same location in Minas Tirith (Midsummer), thus obviating a separate trip. Minas Tirith (Midsummer) is available to characters of all levels. At Minas Tirith (Midsummer), the carving (Reputation Item) recipes are purchased from the Guild-leader; there is no separate NPC for guild-reputation-item recipes, as there is in other locations. The only downside of Minas Tirith (Midsummer) is that the "Introduction" quests for each guilded profession cannot be turned into the Guild-leader, since those quests require a specific named NPC, who does not reside there.

Named Expert Woodworkers. There are numerous unnamed ones.