From Lotro-Wiki.com
(Redirected from Raid)
Jump to navigation Jump to search

A Raid is a separate copy of a building's interior, a dungeon, or some piece of the game's landscape. Raids are similar to Instances, but are designed on a larger scale with encounters for two or more fellowships of players to complete. The encounters found within usually involve Arch-nemesis bosses that can require complex strategies.

No outside help by other adventurers can be rendered to those within a raid. Doing so allows game developers a greater ability to customize the details of the encounters and makes them more immersive, allowing multiple raids to enjoy the same content without interfering with each other.

Raid Locks are designed to prevent any player from completing the same stage of an instance multiple times in a short period of time. For example, Raid Locks prevent a single character from slaying Helchgam over and over again in order to get his slime. End-game locks generally expire weekly, meaning any character can complete a particular boss battle no more than once a week.

Raids can only be entered by players who are a part of the raid group and have either the same or "similar" raid locks as the raid leader, or no raid locks. If a player is part of a raid that completes a stage in the instance (usually a boss fight), then the player will receive a lock number corresponding to the number of the stage completed. As the raid progresses, more such locks are obtained. A few examples of how raid locks work:

To find out which raid locks you have, open the Social menu, then select the Group Stage Info tab. The lock numbers your character has are listed by instance under Personal Stage Information.

Locks reset at specific days and times for different raids:

Due to the scale and the amount of coordination required from all participants, any successful raid will need organization.
Before starting a Raid or even just a 6-player instance, you normally have to think about what configuration of player skills you will need to complete the event.
Successful groups usually have the three standard spots filled with typical classes - Tank (Guardian), Healer (Minstrel), DPS (Hunter).
However, in LOTRO, these spots can be filled or supplemented by other classes depending on the situation.

The following is a list of commonly assigned duties:

The Leader - Raid Leader or Fellowship Leader (RL/FL) is responsible for controlling a group of allies.
Note that this is an active role during a Raid but not a combat specific role, therefore there is no particular class requirement.

One of the most useful things a Fellowship or Raid Leader can do is to mark targets with an icon.
This action is most useful with Pick-up-groups (PUG)s where the individual players do not know each others characters.

This marking can tell the members of the group to attack that target while the Lore-master and Burglar mez something else that isn't marked.
Because people attack the marked target and not the mezzed target, the mezzed target will stay mezzed unless someone uses an area of effect attack.

Target Marking can also be used to identify certain pary members - typically the Healer, who uses area-of-effect (AOE) heals, requiring that individual recipients be within a certain distance of the Healer.

To do this, first you'll need to set a hot key to mark a target. I set the ` (unshifted ~) key to skull.

In Options, click Key Mapping. Scroll all the way down to Fellowship Target Marking. Click Skull, then press the ` key (or whatever key you want to use). 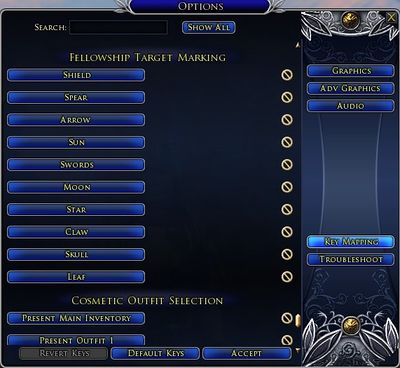 Note class capabilities are greatly influenced by the selection of Traits allowing a particular class to perform multiple roles depending upon trait selection.

Main Assist aka Off Tank (OT) - Normally a MA isn't needed in a 6-man instance since what you usually fight in 6-man, your MT can make the shots on who to attack. an MA is usually designated in high tier (Raid) type runs and usually is either a melee damage-per-second (DPS) class or another tank type class. Any class can essentially fill this role.

DPS - These are your heavy hitters. They punish the mob while the MT keeps the agro on the main target. It is very important that as DPS you must watch how much damage your putting out because if you put out too much, you could potentially steal the agro away from your MT, making you an easy kill especially if you wear light armour and don't have the morale or armour class (AC) to stand up to the damage the mob is putting out. Keep a good eye on this, and put out a good solid amount of damage and your set. Hunters and Champions are the king's of melee/ranged DPS as Loremasters excel in the magic department, though Captains, Burglars and maybe Minstrels(keeping in mind by doing this, you could potentially lose a healer) can have a hand in this area. Area-of-effect attacks do very well to assist the MT in defeating multiple enemies.

Crowd Control(CC) - One of the most important aspects of a 6-man or even a Raid run, is having good CC. Someone needs to be able to essentially take out a mob from the battle, because at many times you may be fighting more then one target. Your MT has a hard enough job keeping the agro of one mob, let alone a whole group of mobs would get his attention disfocused, having him ping-pong around the room to keep agro, making his agro keeping abilities reduced. Keeping mobs under sleep type affects or even fear type's makes the MT's job alot easier, and reduces the morale your healer will have to be keeping up. Having a good CC is essential to any good instance or raid run. Loremasters dominate in this area while other classes like the Burglar and perhaps (depends on situation) Hunter, can also fill a spot, the Loremaster is the essential CC.

Main Healer - Some say the most important spot in a group is the main healer (MH). Your main healer is the main stay of the group. He keeps the MT and most of the group up to health in the battle, and will resurrect(rezz) any members that die after a fight. Your MH's main job is to keep the MT alive so that he keeps the rest of the group intact. If your MH goes down, your MT will follow, so it is imperative that your MH stays alive and does not get any of the agro on the mob. Healing is major agro draw, but as long as your MT gets in the initial agro, your group should be fine. MH's, make sure your only put out enough heals to keep him up, overhealing will gain you more agro and you lose power that you could have used in dire situations. Minstrels and Rune-keepers are the best class for this but Captains can support the role.

Supporting Spots - These are usually your secondaries or your the classes that are specific or any true area, but have a place in a group itself. Off-tanks, Off healers and Off DPS are usually in the roles as well as any Buffers you might have. Captains and Burglars are the ideal Support, as are any of your secondary's that fill the role.

Here are some examples of a normal group:

The RL will often specify a VoIP program for everyone to use, allowing voice communication amongst the raid members. The two most common choices are Ventrilo and TeamSpeak, both easy to set up and readily available free of charge. A third option that is gaining prominence is Discord. For many high-end raiding guilds, a VoIP client is mandatory and sometimes having a mic as well. Although the in-game voice communication for LOTRO could be used for this purpose, it provides far fewer options for sound quality and customization, which can be crucial to allow all raid participants to hear each other clearly.

Notice: Notes are listed below the table.