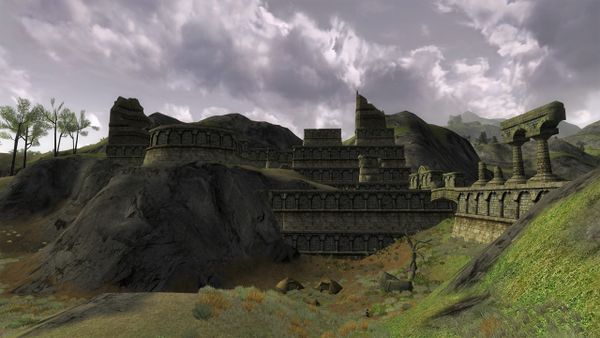 This ruined fortress, once named Carnoglin, is sitting athwart the border between Kingsfell and Nan Amlug West, west of Othrikar. It is now encamped by Dourhands who are scouting and searching for the Rangers and their allies. Somehow they managed to capture Dori, the renowned dwarf who journeyed with Bilbo at the time a certain ring was found. Now they hold him captive within their encampment. 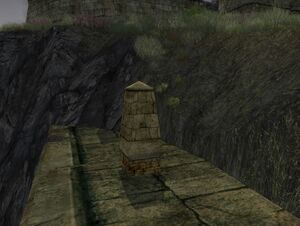 The Founding Stone of Carnoglin

These deeds can be advanced by exploring Ost Galumar:

Ost Galumar once stood as a forward outpost of the kingdom of Arthedain, a steadfast guardian against the shadow from the North. — Deed

Carnoglin
Founded in the name of Malvegil, King of Arthedain. With the skill Thorhaddur the Dwarf and his kindred was the town built.
United in purpose, may Dwarves and Men be ever bonded in friendship. — Quest

Whereas the fortress of Dol Nendír held Angmar in the south, Ost Galumar held Angmar in the north. Several times the Witch King attempted to send raiders into the heart of North Downs to burn and sack villages and farms and every-time cavalry from Ost Galumar would sweep down and destroy them. Arthedain controlled the hills around Ost Galumar so that the Witch King could not flank the city. Using nigh his entire army, the Witch King attacked Ost Galumar in a frontal assault. The Lord of the City and his infantry held the city to the last man while the cavalry swept down those who waited in the fields below the city. Although most of those at Ost Galumar were lost, it was a pyrrhic victory for Angmar as many of those in the siege were also lost. The Witch King had to wait several months for fresh reinforcements out of Angmar.