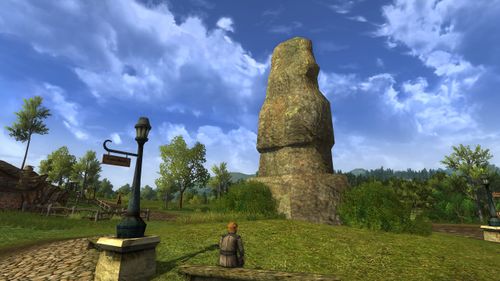 Three Farthing Stone is a landmark within Hobbiton-Bywater in the Shire. [32.2S, 69.6W]

This is a prominent road marker located south of Bywater on the Great East Road, marking the meeting point of three regions of the Shire: the Westfarthing, the Eastfarthing, and the Southfarthing. It is also said that the Three Farthing Stone marks a point near the centre of the Shire. Around the stone are signposts pointing to each of the three Farthings, and benches surrounding it for hobbits and weary travellers to sit.

During the Farmers Faire the locals have erected a large mushroom tent just east of the Three Farthing Stone. During this event this otherwise silent location lives up and many curious visitors travel the nearby crossroad.

After the War of the Ring (after the current Lotro era) Samwise Gamgee tossed the remaining soil of Lothlórien, given to him by Galadriel from her garden, into the air at the Three Farthing Stone while replanting the Shire to help repair damage done by "Sharkey" and his Men. And so...
"Altogether 1420 in the Shire was a marvellous year. Not only was there wonderful sunshine and delicious rain, in due times and perfect measure, but there seemed something more: an air of richness and growth (...) The fruit was so plentiful that young hobbits very nearly bathed in strawberries and cream" — The Return of the King 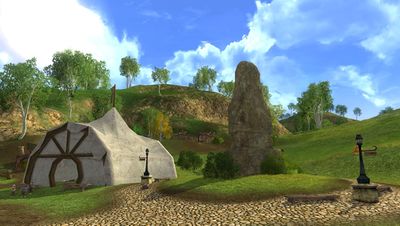 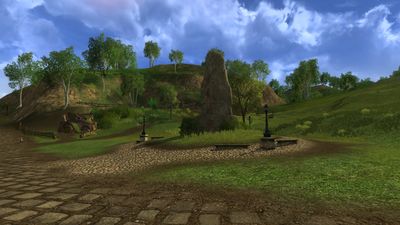