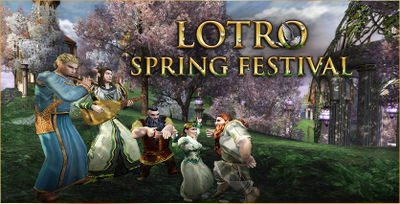 The Spring Festival is a celebration of nature and new growth. It features events to collect flowers, navigate a hedge maze, run along a fence while drunk, and discourage shrews from eating fresh plantings. With each new seasons the vendors often provide a new mount, cosmetic or housing items or pet.

Dance of the Races

Main article: A Fistful of Flowers

The Gathering Flowers event was first added in 2008 as part of Valentine's Day. It was later removed for a couple years before being brought back as part of Spring Festival 2012. This event starts in Bree with you helping a love-struck man cultivate a budding romance and finishes with you gathering many of Eriador's signature flowers.

The Stomp-a-Shrew event was first added during Spring Festival 2010. It is held every spring inside a cave leading to the Festival Garden at Duillond, in Ered Luin. The actual Stomp-a-Shrew event is repeated every 9 minutes. In addition, there are several optional quests available to players many of which are repeatable daily.

The Feast of the Greenfields

Main article: The Feast of the Greenfields

The Feast of the Greenfields was first added during Spring Festival 2009 and is partially an in-game tribute to St. Patrick's Day. It is held every spring just east of Brockenborings in the Greenfields. The Hobbits of the Shire pay their respects to Bandobras "Bullroarer" Took, who led the defense of the Shire the last time the goblins invaded in 2747 of the Third Age. The feast culminates in the drinking game Bullroarer's Challenge, based on how Bandobras use to run atop the fences of the Great Smials to stay in shape and hone his reflexes as the legend goes.

The Hedge Maze at the Bree-land Festival Grounds 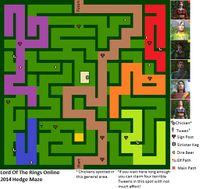 This maze built by tall hedges is available year round on the eastern side of the Festival Grounds with entrances on the west and east side of the maze. However during the Spring Festival, there are several Maze-masters standing at the main entrance on the west side who offer Daily quests to navigate your way through the maze. In the middle of the maze is a beer garden with many festival-goers.

The Inn League vs. the Ale Association

The merry hobbits who love all things food and drink are back again this festival, as well as the surly dwarves who believe they know more about beer and are out to prove it one way or another. May the last man standing... drink some more!

A selection of cosmetic pets and kites are available during the festival from the completion of quests, by barter and from gift boxes.

The following items are available from these Spring Rewards Vendors.