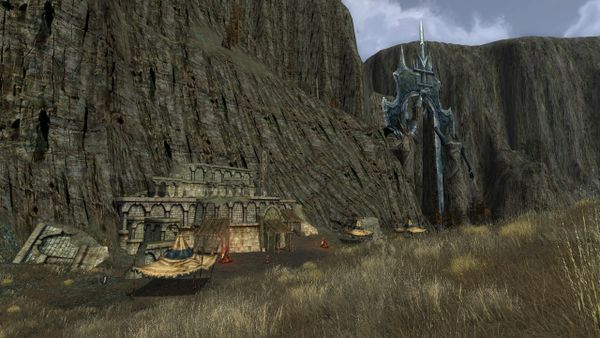 This large Hill-men camp is located athwart the road into the area of Ram Dúath. To the north of the road lies the upper levels of the camp and recently large groups of Hill-men have set up camp and storage among the old fortress ruins, fiercely protecting the stock and themselves. At the lower levels the Hill-men have camps and there the poisonous plague-bearer stays.

Travelling this road to Angmar is unwise, unless with a Fellowship; the area around the gates applies +4 Dread. 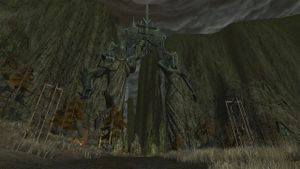 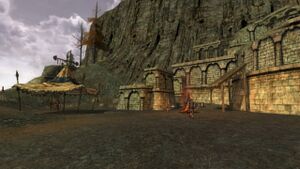 Hillman camp among the ruins 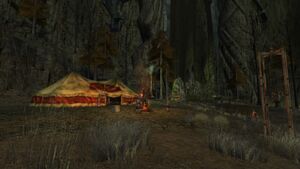 One of several command tents

These deeds can be advanced by exploring Ost Crithlanc:

Ost Crithlanc had been one of the forwardmost outposts of the kingdom of Arthedain. Now it lies in ruins, home to evil Men out of Angmar. — Deed

"In the northeastern reaches of North Downs, near the pass of Ram Dúath, lie the ruins of Ost Crithlanc, a fortress destroyed during the wars with Angmar and Rhudaur. Long these ruins lay undisturbed, but now Hillmen out of Angmar in service to the Iron Crown have begun to move the through Ram Dúath and encamp at there, mustering for Angmar’s assault against the Free Peoples of the North.

"The once-empty ruins are now dotted with pavilions and campfires, and patrolled by enslaved servants and deadly archers. A great store of provisions, armour, and weapons is stockpiled there, overseen by skillful armourers. Unchecked, this army will march down upon the unsuspecting peoples of the North with a terrible fury." — lotro.com