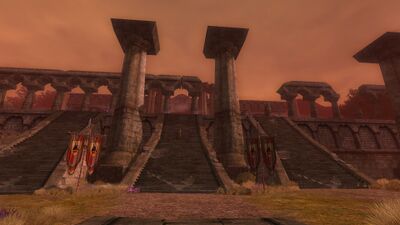 Garth Agarwen: Fortress is a World Instance within Garth Agarwen, in the Lone-lands. [28.8S, 24.4W]

“Garth Agarwen... The ruins of an ancient fortress of Rhudaur, now overrun by corrupted nature and a vile necromantic power out of Angmar. The most terrible power still remains to be confronted.”

The Fortress is an instance that can be found within Garth Agarwen in the east side of the courtyard where Temair the Devoted is located. The Fortress can also be entered via the Instance Join panel.

The instance begins with hill-men, and large stairs are straight ahead. Clear out the area below the stairs as you wish. To proceed, go up the stairs.

You may see the bosses Edan, and Esyld right away, but clear out all the wights first to avoid any mobs jumping in the middle of combat. Fighting them together gives them a damage buff, so pull them apart. One of them is range, so keep in mind that if they get to close to each other, you will have to pull the melee one out of the way. Have the tank build agro on one, and everyone else burn down the other, and then move on.

South of where Edan and Esyld are is another area of hill-men, proceed through by heading to this new area, going straight ahead. If you want to complete the optional objective, go straight, and then, take a left up the stairs when you first can. Both eventually lead to the same area, if done you can remain on the top floor, and clear out the area, or jump down. Keep in mind you must clear out the hill-men on the top floor to get back without resetting the objectives.

Eventually if you head south far enough you will encounter Dúnlang along with Eglain adds, who have succumbed to his will. To complete the challenge you must not kill any of the adds, and kill Dúnlang. As the adds will attack the healer, it is best to have the tank gather aggro, without killing any of them. After a short time Dúnlang enters the combat. Kill him. Now head back to Edan and Esyld.

Proceed through the gate, through a short hill-man zone, to another wight area. Here you will see a large pool with Raugzdrok ahead. Since wights patrol around the pool it is best to bring the fight into the pool. Keep in mind that whirlpool like structures are darkwater. These need to be defeated to complete the Darkwater objective.

After defeating Raugzdrok, and the darkwater, you can clear out the area around the pool if you want. Then climb the stairs to the right of the pool at the far ends of the hill. Then head to the stairs on this next level, and keep going up until you encounter Vatar.

Vatar will say a speech, and show a vision. Then he will attack. Burn him down. When he is almost dead he will become un-attackable, and crawlers will spawn. Deal with these via Aoe, and he will fully heal. Then you kill everything. He will die, and a gate will open. Notice the chest to the right of it? Prepare for combat, and then open it. Have the whole group run through the gate into the area beyond. Delivering the item from the chest to the area will activate the Naruhel combat.

When Naruhel attacks, the Hill-men around her will sacrifice themselves. To complete the challenge, they must not be killed by you. Ignore them, and deal with the boss. Keep all non-melees out of range, as Naruhel has Aoe and often preforms an Aoe punt. Naruhel will gain abilities by the hill-men, such as immunity to FMs. With good group coordination you should be able to pass through these without mishap. After her defeat you've completed the instance, talk to the "new" Naruhel, and possible clean the spring, if you have the quest.