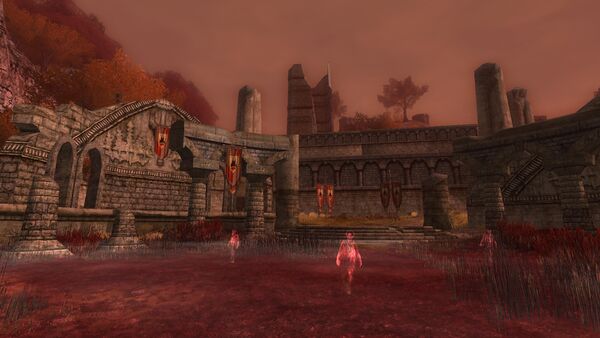 Garth Agarwen is an area within the Lone-lands, in the north-eastern region.

Garth Agarwen (Sindarin for Fortress of the Blood-maid) is reached via the Outer Gates within the north-eastern corner of Agamaur. Outside those gates are the services for Garth Agarwen, a Camp Site Fire with a Mustering Horn, Travelling Vendor, Eglain faction barterer, and quest givers.

For the world instances, head eastward past a stairway and, for the Barrows continue past the Créoth encampments; for Arboretum and Fortress, head southwards through a labyrinth of ruins, past a small section of woods, and into an area with gloom-waters and more créoths. At that section Temair the Devoted patrols a platform, heavily guarded by créoths. The instances are aimed at level 32, Small or normal Fellowships, and required prerequisites exist.

Landmarks which are located within the instances 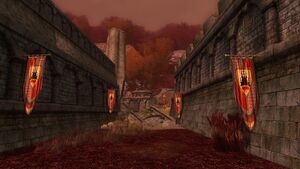 A Corridor within Garth Agarwen 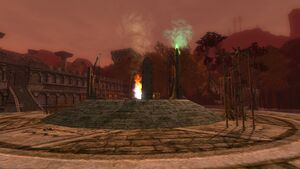 The following creatures are found within the public area:

"When Men first settled in these lands, the Hillmen of Rhudaur settled Garth Agarwen and treated nature as they should. As time passed and the influence of the Witch-king spread throughout the kingdom, the Men fell to corruption and turned against nature, poisoning the land and its caretakers." & mdash; Quest

"Garth Agarwen lies in the north-east hills of the Lone-lands. Once a great fortress of the ancient kingdoms, rumours say that it has become a stronghold of corruption and evil." — Deed