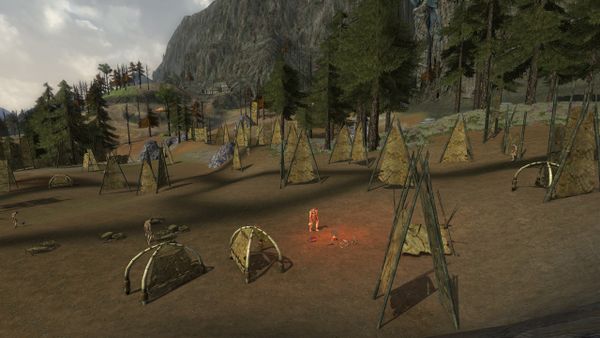 This camp of giants, the Rauta-lehmä traitors who now are aligned with the Enemy, is located in a mountain pocket in the furthest east of Nan Amlug. The gates into Angmar are a distance north of the camp and no doubt that bodes no good for neither this group of giants or North Downs. Directly north of this camp the cave of Tham Úmdúr is found.

These deeds can be advanced by exploring Fashat Laug:

It seems that Fashat Laug village and others have fallen under the sway of Angmar. The Earth-kin are fighting amongst themselves – to the amusement of the lords of Angmar, no doubt. — Deed

"When Oskari, brother of Iivari and First Hunter of the Suuri-lehmä tribe, led many of the Earth-kin hunters in a revolt against their brethren, he aided in the creation of a new tribe: the Rauta-lehmä, the tribe of the Iron Aurochs. He led them eastward into lands controlled by the Rauta-lehmä’s masters, the Angmarim. There, in the North Downs, they established a war-camp at Fashat Laug, near the ruins of Ost Crithlanc.

"At Fashat Laug, the Rauta-lehmä gather their might, recruiting more of their kindred and replacing their crude hunting tools with iron weapons provided by the Hillman-armourers at Ost Crithlanc. When the storm of Angmar's wrath is finally released, the Rauta-lehmä of Fashat Laug will stride forth against their own people and all others who stand against the Iron Crown." — Lorebook