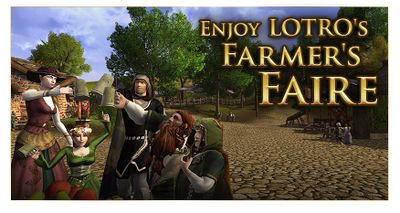 The Farmers Faire is a special event held in August - September.

It is chiefly based in Bywater & the Party Tree. In the tradition of other seasonal festivals, during the Farmers Faire players can participate in various events such as Farmer Sandson's Egg Scramble or trying to steal some of Farmer Maggot's delicious (and peculiar) mushrooms to obtain rewards such as cosmetic clothing, housing decorations and mounts. Players can also try their luck at The Keg-race of Thorin's Hall where the drunkest of Dwarves race each other for glory and honour. For The fisherman of Middle-Earth their are also many fishing related activities to enjoy.

Where: Bywater (for starters), Celondim Dock's, Thorin's Hall underground river and just south of Bree near Halecatch Lake.
Beginning in Bywater, you will have the opportunity to do some exciting angling in several different areas of Middle-earth. Try your luck (you'll need a lot of it) at Bywater Pool, the local fishing hole. [31.2S, 70.0W]
Go fishing, or try the different quests, and by the shore Godo Bracegirdle is happy to barter fishes for tokens.

In the Marish, north of Bamfurlong, Osbert Puddifoot offers a sneaky quest. [33.7S, 64.6W]
He asks you to try your hand at grabbing Farmer Maggot's mushrooms without being detected by his trusty hounds, Fang, Grip and Wolf. Collecting mushrooms earns you Farmers Faire Tokens, but beware, consuming the mushrooms can have quite interesting effects.

Where: Inside the Keg-race of Thorin's Hall, entered via a horse found every nine minutes, next to the Stable-master at Thorin's Gate. [15.0S, 103.6W]
The dwarves of Thorin's Hall are having races amongst the doughtiest drinkers and runners of their folk. You can observe the races and venture a guess at who is the likeliest to win.

Where: The Party Tree, the Festival Garden, and Thorin's Hall
Many festival patrons of Middle-earth are a bit zealous in their appreciation, and may need help gathering their wits when all is done.

The following events are also held during every seasonal festival:

The following deeds can be completed during the Farmers Faire:

Boss from the Vaults: Thrâng

Barterer: Ernwyd Brandybuck (Quartermaster at the Party Tree in the Shire) [29.8S, 71.6W]