From Lotro-Wiki.com
(Redirected from Farmer's Faire)
Jump to navigation Jump to search

The Farmers Faire is a special event scheduled to take place in mid-to-late summer, and is chiefly based in Bywater. In the tradition of other seasonal festivals, during the Farmers Faire players can participate in various events such as "Farmer Sandson's Egg Scramble or try to steal some of Farmer Maggot's delicious (and peculiar) mushrooms"[1] to obtain rewards such as cosmetic clothing, housing decorations and mounts.

At Sandson's Farm, the chickens have gone wild with all the people running around. [32.0S, 74.4W]
Chase the chickens through the yard and grab their eggs as they drop them. Collecting eggs earns you Farmers Faire Tokens; the more exotic egg, the better. Keep a watchful eye out for the elusive Golden Egg worth 50 Farmers Faire Tokens! You must bring a Festival Ticket to enter the challenge.

In The Marish, north of Bamfurlong, Osbert Puddifoot offers a sneaky quest. [33.7S, 64.6W]
He asks you to try your hand at grabbing Farmer Maggot's mushrooms without being detected by his trusty hounds, Fang, Grip and Wolf. Collecting mushrooms earns you Farmers Faire Tokens, but beware, consuming the mushrooms can have quite interesting effects. You must bring a Festival Ticket to enter the challenge. 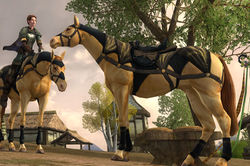 The festival mounts are obtained by bartering items with Will Peartree, the Festival Horse Trader at Hengstacer Farm in Bree-land.