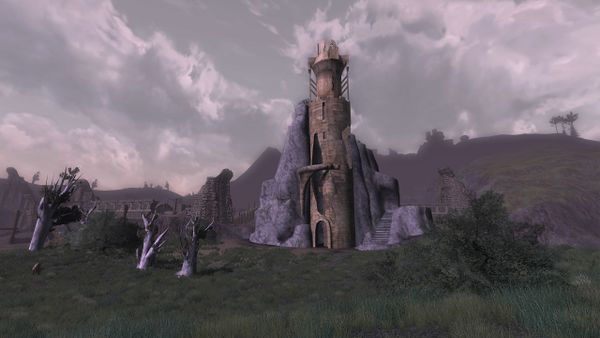 Falconer's Tower is a landmark within the Fields of Fornost, in North Downs. [8.7S, 53.5W]

Standing erect at a hilltop this ruined tower reminds the visitor of times when the Arnorian kings ruled these lands. Now only foul creatures are defiling its foundation. 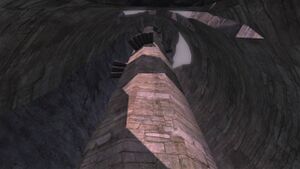 Inside the crumbling tower

These deeds can be advanced by visiting Falconer's Tower:

The Falconer's Tower was a watch-tower from which guardsmen could see for miles across the North Downs. It was named so because the guardsmen used falcons to spy the land and deliver messages to the king at Fornost Erain. — Deed

"In the high North Downs, stretching to the north and east of the Fields of Fornost, where the last king of Arthedain fought a losing battle against the Witch-king of Angmar and the North-kingdom ended, lay the scattered remains of the once-great city of Fornost Erain, the Norbury of the Kings. In the legends of the Men of Bree, these ruins have become the haunt of spirits and robbers and have an ill-omened name, Deadman's Dike. Little is it known that Rangers also go there at times to venerate their ancestors and remember their great deeds.

"This watch-tower, its name long-forgotten, once overlooked the eastern reaches of Fornost of which little now remains. Though crumbling and decrepit, it still stands as a grand testament to the architects of Arnor, a monument both carved from the living stone upon which it rests and built from stone blocks and mortar. The ruined tower yet watches over the eastern gate of Fornost, which still stands amidst crumbling walls, bearing the charge of the Seven Stars, though the courtyard beyond has become home to cursed shades, tainted by failure and betrayal.

"While in general the North Downs is a largely unexplored territory, that is not true of the place where this tower resides. In the histories of Arnor, the North-kingdom of the Dúnedain, Fornost plays a key role. This is where the kings of Arthedain set up their throne after the decay of Annúminas and held against two invasions by the Witch-king of Angmar and his allies in Rhudaur, only to fall at last. It was briefly held as the seat of the Witch-king's power in Arthedain, until a captain of Gondor and his Elvish allies drove him out again." — lorebook