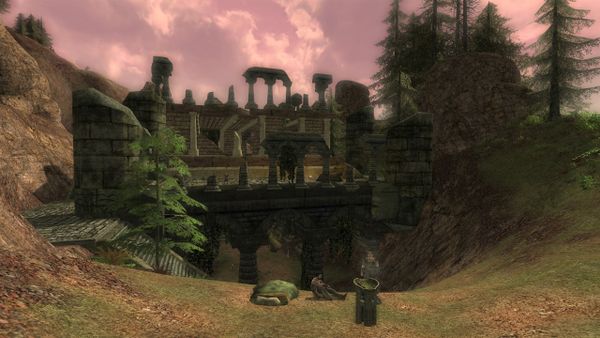 Echad Candelleth is a settlement located within the area of Tâl Bruinen, in the Trollshaws. [37.2S, 14.0W]

These ancient ruins are found high above River Bruinen, between the Ford of Bruinen and Gwingris. Here are Elf-scouts charged by Elrond to watch the land for signs of the Enemy, but they are also welcoming weary adventurers who dare journey this wilderness. The outpost Candelleth and her scouts have set up is giving respite from the many threats encroaching on the surrounding area.

The outpost was built in three levels and services are found from top to bottom, such as a Milestone, Camp Site Fire, Stable-master, a Healer, as well as Campfires. And the inhabitants gladly hand out many quests for the surrounding areas, and some to foreign lands.

Nearby is Garbert's Cottage where a fishermen couple lives, though recently a very strange creature has been plaguing them. 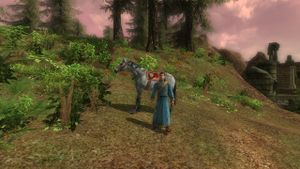 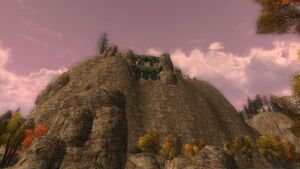 Echad Candelleth from River Bruinen below 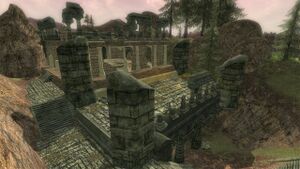 Another view of Elf occupied ruins 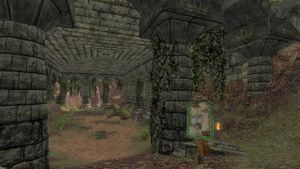 The ruin of Echad Candelleth is believed by scholars to have once been a center of art and learning in the ancient kingdom of Rhudaur, before it fell beneath the corrupt sway of Angmar and was destroyed in wars with its neighbours after which even its original name was lost.
Now it simply acts as a makeshift camp for those hardy souls brave enough to explore the surrounding wilds. — Deed

"In the months after Strider brought four hobbits to the hidden valley of Rivendell, Elrond Half-elven sent forth many Elf-scouts and Rangers to search the surrounding lands for signs of the Enemy's servants. One of these scouts, an Elf-woman named Candelleth, established a way-station in Tâl Bruinen, the southern reaches of the Trollshaws that follow the course of the river Bruinen.

"From this outpost, called Echad Candelleth, many scouting parties resupply and take much-needed rest from their arduous journeys. Echad Candelleth also sometimes hosts parties of hunters from Bree-land and from the villages east of the Misty Mountains. Recently, the outpost has given succour to hunters frightened by a strange creature seen wandering the woods of Tâl Bruinen." — Lorebook