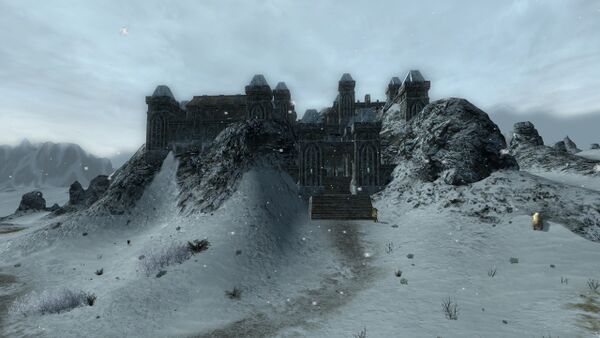 Zigilgund is a settlement located within the area of Länsi-mâ, in Forochel. [9.5N, 81.1W]

This ancient fortress is located at the west-most end of the main road, at the centre of the plains of Länsi-mâ, and only its eastern gates are open. Zigilgund stems from an old dwarven tongue: "zigil" means "silver" and "gund" means "excavated tunnel". [1][2] Likely the name refers to the adjacent Icereave Mines but either way, those tunnels have lain unused for long years now and it is just recently the fortress is taken into use again by the Longbeards.

Zigilgund affords the services of a Stable-master, Milestone, Mailbox, Tasks Bulletin Board, and a Forge. Furthermore there are a Supplier & Provisioner, Healer, as well as a Burglar Trainer who has lost his fellowship as well as most of his equipment. Plus many quest-givers. 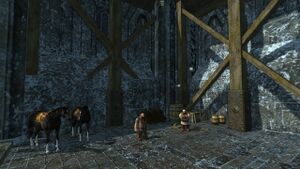 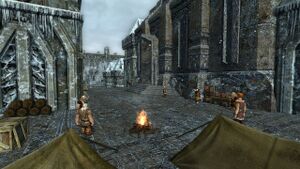 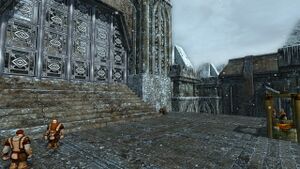 The upper level with the forge 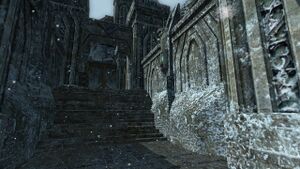 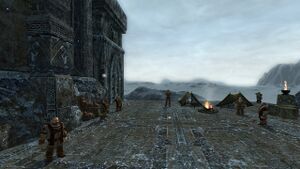 "Zigilgund is an ancient Dwarf-site to which the Longbeards have only recently returned." — Deed

"Forochel is Lossoth land, but the so-called Snow-men of the North are not the only folk to build and thrive here. In times past, wandering Dwarves have come to the lands surrounding the Ice Bay in search of ground to excavate and new treasures to unearth. These Dwarf-miners of old built what icy ruins can be found throughout Forochel, even be found within the forbidding glacier of Jä-kuru. Most of these ruins have lain empty for years and are only now being warmed again by the fires of the living.

"In the west of Forochel, between the Norsu grave-fields and the steaming sulfur-pools of Länsi-mâ, the stout Dwarf-fortress of Zigilgund protects Free Peoples from harsh winds and marauders. Here, Longbeards from the south have established traders and a Stable-master, and they have worked with fellow travellers to create a safe base between the hill-camp of Itä-mâ and the remote Lossoth outpost at the north end of Talvi-mûri. From here, swords can strike out against the Dourhands to the west and feral Gauredain to the east.

"As one Zigilgund Dwarf puts it, “We Longbeards are allies with the Lossoth against the traitorous Dourhands. It has been tenuous, but helpful to our cause.”" — Hero's Guide