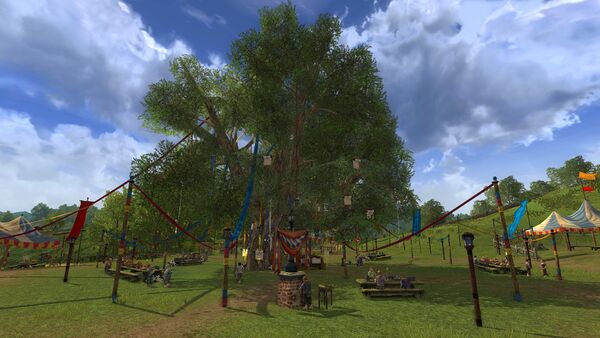 The tree is the centre piece of the Party Field in Hobbiton proper and it is a gathering site for all the Shire, where Hobbits celebrate festivals and important birthdays. At all times Opal Goodbody can be found preparing delicacies for upcoming celebrations at the nearby ovens. A Party Planner and labourers can also be found preparing for the next party. 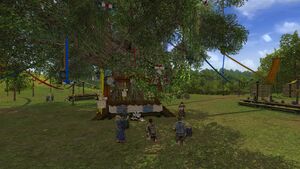 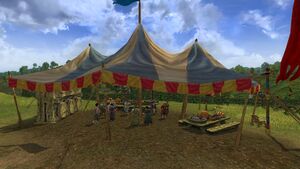 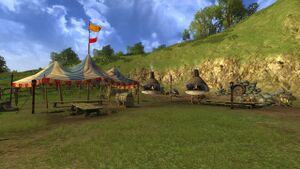 Ovens at the Party Tree

These deeds can be advanced by visiting he Party Tree:

"This enormous tree has long been known as a place where festive occasions can be celebrated by the Hobbits of the Shire. Standing on the outskirts of Hobbiton proper it can be seen for quite some ways, and during festivities it is often hung with dozens of bright streamers and lanterns providing a cheery atmosphere for most any events." — Deed text

On 22 September, III 3001, the famous Birthday Party for Bilbo Baggins' 111th and Frodo Baggins' 33rd birthdays was held at the Party Field. Bilbo's farewell speech was delivered under the Party Tree. — tuckborough.net

On SR 3 November 1419 when Samwise Gamgee returns to the Shire:
"As they crossed the bridge and looked up the Hill they gasped. Even Sam's vision in the Mirror had not prepared him for what they saw. ... "They've cut it down!" cried Sam. "They've cut down the Party Tree!" He pointed to where the tree had stood under which Bilbo had made his Farewell Speech. It was lying lopped and dead in the field. As if this was the last straw Sam burst into tears. ..."

"The little silver nut he planted in the Party Field where the tree had once been; and he wondered what would come of it. ... Spring surpassed his wildest hopes. ... In the Party Field a beautiful young sapling leaped up: it had silver bark and long leaves and burst into golden flowers in April. It was indeed a mallorn, and it was the wonder of the neighbourhood." — The Return of the King, by Tolkien

During festivals, Hobbits from all over the Shire gather at the Party Tree and set up feasting tables, special games and activities to enjoy during the celebrations.

Dance Leader Oger Brockhouse teaches revellers to dance like a Hobbit and conducts a dancing challenge every 20 minutes. The Inn League member Ailward Chubb also conducts a drinking challenge at The Party Tree for revellers interested in becoming initiated into the league. Travelling Farmer Amabel Redfern visits the Party Field during seasonal festivals to plant and harvest special crops.

Only during the Harvest Festivals the Haunted Burrow is open for further excavations and treasure hunting.