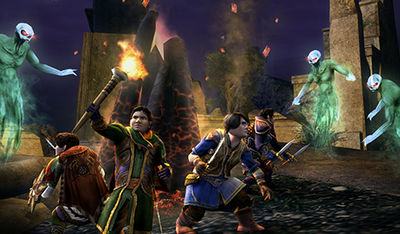 Stand at Amon Sûl, a level 25-140 skirmish, is located within the Lone-lands on Weathertop. Skirmishes, can be started by using the Instance Finder, (as long as you're not in an instance already).

Servants of the Witch-king have been drawn to Weathertop following a confrontation between the Nazgûl and the Wizard Gandalf the Grey. The Ranger Candaith has laid a trap to defeat the Cargûl who leads the dark forces to the ruins of Amon Sûl.

This Skirmish has a minimum level of 25.

Fight waves of assaults while trying to keep the four campfires alive with torches and keep Candaith alive.

Simple boss fight against Narudúr the Cargûl. Remember to loot the corpse before leaving.

Remember to loot Narudúr corpse before leaving. Completing the skirmish will reward The Eglain Reputation. Rewards and Loot scale to the level, group size, and tier of the Skirmish. Loot is found by/at/in/from: