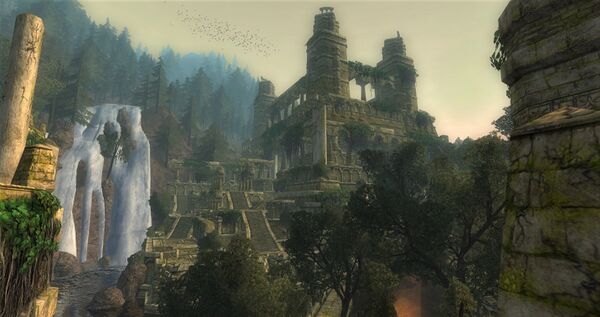 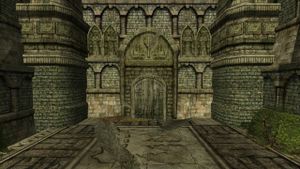 "A band of mercenaries led by the Gaunt-lord Ferndur have begun looting hidden a Rhudauran temple, left in ruin since the fall of the Northern Kingdoms. What purpose does this servant of darkness have within?"

Though this old and once glorious temple is indeed towering high above the road between Ost Chall and Ost Brandras, there is no entrance from the path leading up the temple. Rather, the instance is entered through a back-door in western Ost Chall. The Lost Temple is a target location for the In Their Absence quests.

This is a scaled instance, designed for a fellowship (6 players) level 65 and up. Estimated completion time is 30-45 minutes (tier 1).

Note: It's highly suggested that you install a plugin that assists with curables for this instance (e.g. BuffBars).

Have the tank grab aggro on Angaidh and pull him away while everyone else attacks Sidhág. The two of them gain a buff when together and a powerful AOE attack, so keep them separated. Sidhág has a channeled attack; there's no induction circle but it can be interrupted or broken by LoS. Sidhág doesn't move much so any time the two group up, have the tank pull Angaidh out of buff range again. This should be done on the ground floor, back and forth, with one of each of them on opposite ends of the room so everyone remains within healing range. Attack Sidhág down to 50% morale then switch to Angaidh and kill him. Switch back to Sidhág and finish her off.

Killing Sidhág and Angaidh within 10 seconds of each other will complete the Synchronized Slaughter deed and grant the Swift Executioner title.

Note: A minstrel is preferred on Sidhág and Angaidh (because of nuke heals), although a good rune-keeper can heal the fight.

There are numerous curable diseases encountered in the inner temple, many of which you'll have to actually decide if, when and where you cure them. You can easily go through a full stack of pots after a few wipes, so plan accordingly.

Notice: This fight has been setup to be an endurance fight which requires patience, discipline and coordination to conquer. Hard DPS on Ferndúr will only push the fight further and further out of control. See below on why pacing damage and tactics.

At the start, let the main tank grab solid aggro on Ferndúr and then fight him in place.

At 250k morale, Ferndúr will start to put incurable eyes on players.

The frequency of these eyes is affected by how much damage (15-25k?) is dealt to him, or after a set period of time expires (1m?) if that damage amount hasn't been reached.

When the first yellow-green eye is applied, immediately stop all damage on him and have the tank kite him around the room. The healer should be prepared to keep this player healed while the eye does damage and everyone else should be ready to pick up the corpses that spawn.

Drop the cloud info: Your fellowship has the option to either:

From there, continue to drop clouds along the outer wall, in order, next to the last cloud that was dropped. It's very important to place these clouds in order so that when they clear up later, they will also clear up in order giving you a continuous area to work.

If all adds are cleared and nobody has an eye, the tank can bring Ferndúr to the healer and everyone can attack him until the next eye is applied.

At 150k morale Ferndúr will spawn about 8-14 Rot Maggot Larva all at once. Either root/mez them and kill them separately or burn them all at once making sure to pot any infestations. Constantly moving to avoid infestation works extremely well.

Towards the end of the fight, there's usually an urge to do hard DPS. Resist this temptation, since you'll quickly run out of space to work with too many eye clouds to drop and not enough space to drop them. The clouds expire after a long timer giving you more room to work, so patience pays off in this fight.

Challenge Mode: Spawn and kill all of the corpses in the final boss room prior to killing the boss (they reset if you wipe). The amount of damage Ferndúr will take between eyes is smaller than Tier 1. (5-15k?)

There is a time limit of 11 minutes before the boss fills the room with clouds, so clouds need to be placed strategically to hit as many corpses as possible. You need to steadily DPS Thadúr to generate enough eyes to raise all of the corpses and defeat Thadúr within the time limit, but also clear the adds quickly so you don't get overwhelmed by them.

(Wardens constantly executing conviction on the run is very effective.) 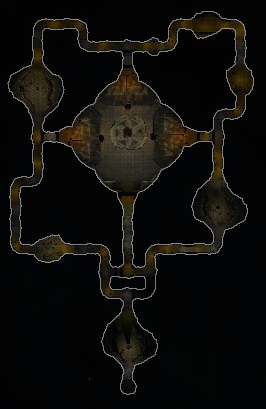