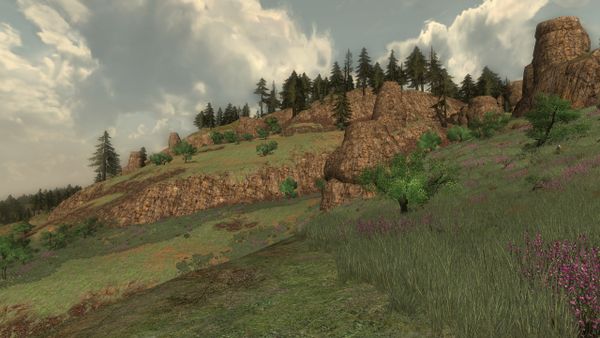 High Moor is an area within the Trollshaws.

Eastwards from Bruinen Gorges and River Bruinen, along the Great East Road, lies the barren High Moor, a rough highland dotted with rock, shrubs, and trees. In the north-east may be found the secret entrance to the hidden valley of Imladris. In the south-east a narrow gap leads into the Giant Valley and Eregion beyond.

These uplands are known for its giant moor-flies, bear, boar, and lynx. Though it is also the only area in the Trollshaws not to house any trolls. The few landmarks are natural, as even the ancient Men of Arnor have left the area untouched. The turbulent ford over the Bruinen river is where the fabled Frodo Baggins and company encountered the Black Riders. A bit south, by the eastern shores of the river the most beautiful lilies may be found, at the Blooming Fens, however guarded by bog-lurkers. Finally, a fabulous view over Imladris opens past its gates, a hidden and narrow gorge.

The Great East Road, running through these highlands, provides the main means of navigation through to the Elven refuge. A Camp Site Fire with a Mustering Horn is found, quite near the passage into Giant Valley. Nearby, a stable-master and quest-givers Canaddal and Ringhul are found at High Moor's Scout's Camp, just above the switchback coming up from the ford and the trail from Tâl Bruinen. Quests are few but some are repeatable. 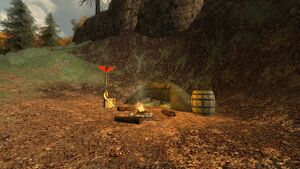 The mustering camp in High Moor 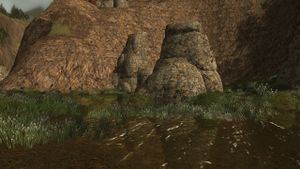 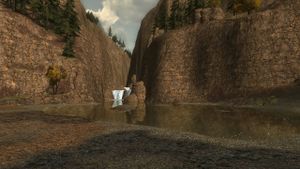 The Ford of Bruinen 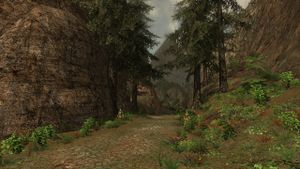 The Gates of Imladris

"You are come to the very edge of the Wild, as some of you may know. Hidden somewhere ahead of us is the fair valley of Rivendell where Elrond lives in the Last Homely House ...
"There seemed to be no trees and no valleys and no hills to break the ground in front of them, only one vast slope going slowly up and up to meet the feet of the nearest mountain, a wide land the colour of heather and crumbling rock, with patches and slashes of grass-green and moss-green showing where water might be." - The Hobbit, Tolkien