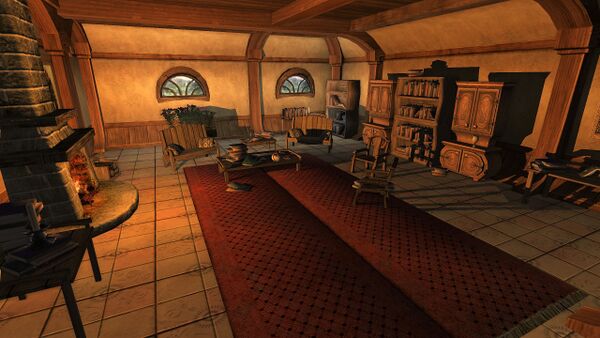 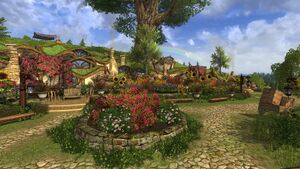 Above the lane known as Bagshot Row in Hobbiton proper, and directly above the Party Tree, explorers will find the former dwelling of Bilbo and Frodo Baggins, known as Bag End. An unassuming Hobbit hole, if slightly better appointed than most, Bag End is a series of rooms and corridors built into the Hill by Bungo Baggins, and entered through a simple, circular wooden door. However, it is not so much the dwelling itself that is of such great interest, but the tales and lore it holds.

With Frodo now moved to Buckland, officially to live amongst his Brandybuck relations, Lobelia and Lotho Sackville-Baggins – as unpleasant a family of hobbits as you are likely to meet – now live within. The once well-tended gardens and warm lights of Bag End are not as merry as they once were, yet the dwelling remains a favoured topic amongst the hobbits of the Shire and probably will be for generations to come. 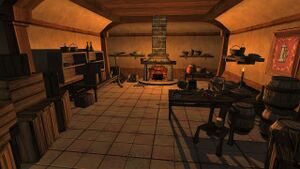 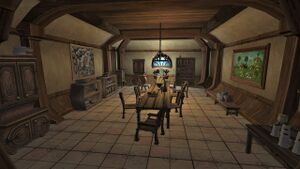 The tales of Bag End's inhabitants and what occurred within are the makings of many a Hobbit legend. This is the gathering place of Thorin and Company, the dwarves that adventured to Lonely Mountain to slay the dragon Smaug and reclaim their ancestral home beneath Erebor. It is said that Bilbo Baggins himself went along on that journey and brought back untold riches from the dragon's hoard, but few believe that the treasure actually exists (and even fewer believe that old Bilbo had a hand in the slaying of anything, much less a dragon). The Wizard Gandalf was often seen entering Bag End to visit Bilbo, and later his cousin and heir Frodo, but on what business, none could say.

Of the Shire landmarks likely to be visited first by Lotro players, the home of Bilbo and Frodo is likely one of the foremost. Much was written about the dwelling and the surrounding garden, hills and countryside in Professor Tolkien's works (including both The Lord of the Rings and The Hobbit), so great care was taken to thoroughly research the source material and existing maps when conceptualizing Bilbo's home, and then modeling it for the game. No doubt players will want to pay a visit to this particular Hobbit hole, but as the days since Frodo's departure grow darker, adventurers can expect a far different welcome from the less trustworthy, and certainly less friendly, residents that now call Bag End home. — lorebook