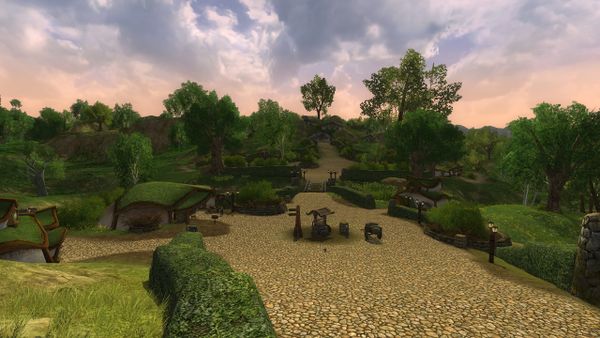 Tuckborough is a settlement located within the area of Tookland, in the Shire. [33.2S, 71.0W]

This is one of the oldest and important settlements in the Westfarthing, at the west end of the Stock Road. Its name probably means "Took city". Tuckborough is the traditional home of the famous Took family, and the military leader of the Shire known as Thain Paladin Took II.

Without direct road connection, southwest of Tuckborough lies the Shire Homesteads and straight west is Michel Delving, the road rather goes straight north towards Hobbiton and at the first crossroad, turn west via Waymeet. From Tuckborough the Stock Road goes straight east via Old Odo's Leaf-farm and Woodhall towards Bree-land. The southern hills into which the hobbits have excavated their homes shelters Tuckborough from a large Bear Dens. However, the bears often cause troubles for the honey-makers to the east, not to mention you hobbits that visit the Great Willow. 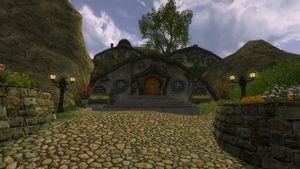 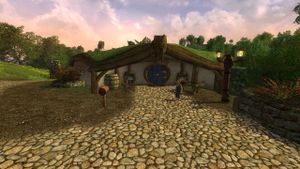 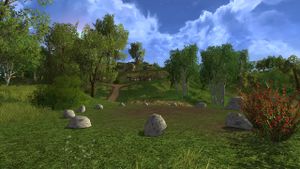 It is known that Tuckborough was one of the oldest settlements of the Shire-hobbits, though whether it dated all the way back to the Shire's foundation is open to question. The Yearbook of Tuckborough (also called Yellowskin) contained entries dating back to approximately III 2100 (or c.500 by the Shire-reckoning), which might imply that the town itself was founded in the same general period, though that dating cannot of course be taken as conclusive. - lorebook

When the Shire was invaded by Saruman's forces in III 3019 during the War of the Ring, the Took hobbits were able to defend themselves in the tunnels of the Great Smials at Tuckborough. Later the Great Smials became a repository for historical books and records, and would eventually contain the Thain's Book, the most complete record of the Hobbits' role in the War of the Ring.