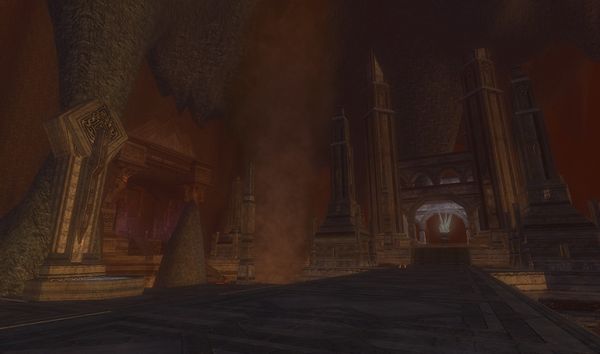 The Flaming Deeps is an area within Moria in the southern region.

This area is connected with the Water-works to the west, Zelem-melek to the north, and the Redhorn Lodes to the east.

Beyond the Great Delving and the halls of Nud-melek, deeper still than the priceless mithril veins of the Redhorn Lodes tower the fiery forges of the Flaming Deeps. When Durin ruled, these lower depths were home to the Dwarves of Moria who ceaselessly manned the smithies and mammoth forges stoked by constant streams of ore from the Redhorn Lodes. The Dwarves toiled endlessly to mine the caches of gold, iron, and mithril — the noise of their efforts eventually waking the monstrous Balrog from its ancient sleep deep in the Shadowy Abyss and forcing their own exodus.

The ancient halls and rough-hewn passages of the Flaming Deeps are some of the grandest and most breathtaking structures in all of Moria. Sandstone, basalt, granite, wulfenite, gypsum, smoky quartz, beryl, feldspar, and more are found in walls, columns, and intricately patterned floors. Words fail to describe the grandeur adequately. Towering pillars that disappear into darkness above stretch toward an unseen horizon, and monumental stone bridges spanning monstrous chasms are a testament to the engineering magnificence of the Dwarves.

Now new heroes of Middle-earth must brave the dangers of Moria in the fervent hope of conquering the world beneath and returning this once-great realm to the control of its rightful owners, the Dwarves.

Though the Dwarves that once roamed these magnificent passages are gone, the forges are not cold and the halls do not lie empty. Today the Flaming Deeps have become home to savage Orc tribes. They are ruled by the ferocious Fire Orcs of the Ghâsh-hai and their allies—forces of the powerful Mazog, leader of an Orc army risen from the bowels of the Shadowy Abyss. The Ghâsh-hai and Mazog's Orcs are quartered in these old Dwarf-dwellings, slaving at the forges until they drop from exhaustion, giving their last measure to supply Mazog's army with armour and weapons. He intends to rally under one banner the tribes of Orc and goblin-kind that roam the sprawling halls of Moria. Furthermore, the Ghâsh-hai work to expand the ancient tunnels on the outskirts of the Flaming Deeps to commune with the Balrog. These efforts are all in the name of the Dark Lord Sauron.

Heroes who dare to undertake this venture must make their way to the Flaming Deeps through several different, treacherous sections of Moria. The easiest route is a newly carved passage that wends its way from the southern halls of Zelem-melek. Of course, the easiest isn’t always the most-sought by seasoned adventurers.

After the heroes begin their exploration of the Flaming Deeps they soon discover that Uruks from Mordor and the servants of the White Hand are not the only Orc-kind within the region. To complicate matters, the Fire Orcs of the Ghâsh-hai — and their unswerving devotion to the Balrog — pose a grave threat to the heirs of Durin, as well as to the rest of Middle-earth... -- [1] 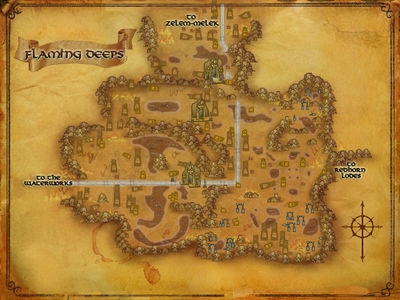 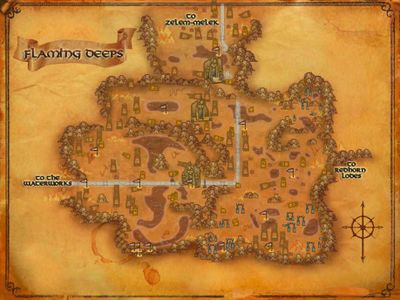 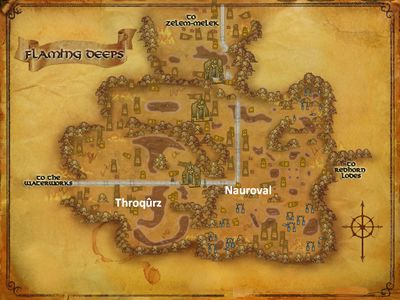 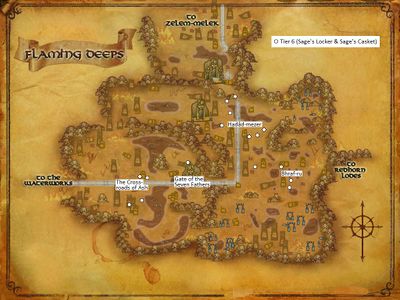