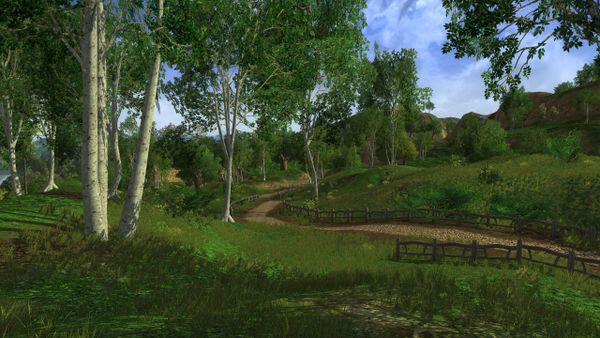 Green Hill Country is an area within the Shire in the southern region.

This is the country between the Tookland and the Marish, with Hobbiton-Bywater and Bridgefields to the north. In the northern part Green Hills Country includes the Great East Road and The Water. The southern part is sheltered by steep ridges all the way. Near Wellbridge springs the southbound Shirebourn that soon joins a larger water north of Narrowcleeve and soon it throws itself down a beautiful waterfall just south of Woodhall.

Through the midst of the country runs the famous Stock Road, from Tuckborough past Woodhall to Stock. It was this road Frodo and his fellowship travelled from Bag End to Farmer Maggot in Bamfurlong when leaving the Shire. And, this is the road where a new Hobbit character first sets foot in the Shire, when helping Bounder Boffin put they behind bars.

The only settlement is lovely Woodhall, though almost without services. 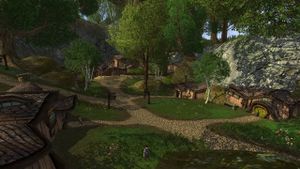 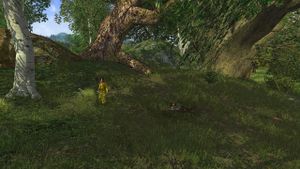 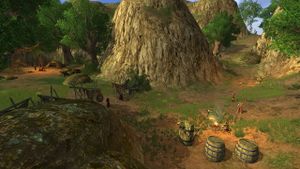 "The western feet of the Green Hills were in the Westfarthing, in the lands of the Tooks. From Tuckborough, a road ran eastwards through the Green Hill Country, and it was this that Frodo, Sam and Pippin briefly used in their journey from Bag End.

"After some time they crossed The Water, west of Hobbiton, by a narrow plank-bridge. The stream was there no more than a winding black ribbon, bordered with leaning alder-trees. A mile or two further south they hastily crossed the great road from the Brandywine Bridge; they were now in the Tookland and bending south-eastwards they made for the Green Hill Country. As they began to climb its first slopes they looked back and saw the lamps in Hobbiton far off twinkling in the gentle valley of The Water. ...

"Frodo turned and waved a hand in farewell. 'I wonder if I shall ever look down into that valley again,' he said quietly." — The Fellowship of the Ring, by Tolkien