From Lotro-Wiki.com
(Redirected from Foundations of Stone)
Jump to navigation Jump to search 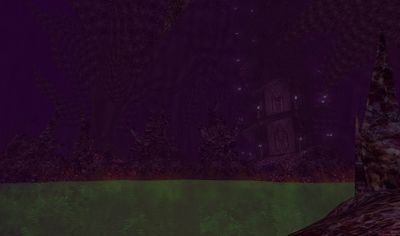 The Foundations of Stone is the deepest area in Moria. It is connected to Nud-melek and the Redhorn Lodes. 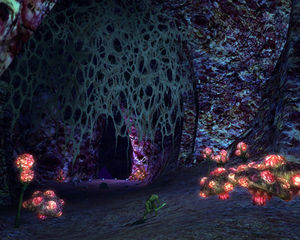 Fungus-covered walls in the Foundations of Stone

This deepest region of Moria is a shadowy abyss, a chilling, vast, and strange place made of twisted stones, woeful waters, and creeping fog. Horrifying monsters haunt these dark cracks in the earth, lurking amid swollen and glowing mushrooms, hiding in the shadows beneath strange arches and spurs of living rock. Down here, as far from sun and sky as it may be possible to get in Middle-earth, the screams of agonized heroes echo far and wide…and still go unheard.

Do not abandon hope when you enter here. Hope may be your only protection against the strange perils of this land. The Foundations of Stone are so hostile and strange that even those places to which heroes can retreat in moments of defeat are perilous. Even when your morale has returned, do not let down your guard.

The Foundations of Stone are so called because they make up the bottommost level of Moria. These are the stones upon which all of Khazad-dûm stands and the pits into which all of it may yet fall.

Although deep chasms cut through the spiky, jagged rocks of the ceiling here — linking the Foundations to the likes of Nud-melek above — most living heroes who brave this eerie region arrive through tunnels on the north-west edge of the territory. Look for a hole in the rough eastern walls of the Redhorn Lodes, crisscrossed with spikes of purple-red rock. Follow bridges and trails south through the smoke and fire of southern Nud-melek, down and down, until the sloping floor slips into the blood-hued glow of mushrooms the size of hobbits. By this, you will know when you have crossed the threshold into the Foundations of Stone.

The place is a surreal maze of enormous, spiking rock and strange fungal bulbs. Marbled stone the colour of bone and blood bends and juts into walls and spears. Low caves lure explorers into the lairs of bloodthirsty things that have never been seen by the sun above. It is another world.

Between the fog and the bending tunnels, the true size and distance of things become difficult to read. Beware of shadows obscuring hidden cliffs and of stony spurs disguising side passages and lurking beasts. What may seem to be a gently sloping floor may become a slippery drop into some stinking tributary.

At the heart of the Foundations of Stone lies a great green lake, nameless and strange. Fed by the seepage of numerous small waterfalls, the lake is a grotesque and lifeless cistern, gathering filth at the bottom of the world.

A bizarre sky of haze and thorns obscures patches of the distant roof. Enormous hooks of wicked stone grope into the gloom, reaching to snare whatever falls from the world above. It is like an awful, fanged mouth, and if that is true, then all that sits below it serves as the baleful guts and stomach of a giant and evil beast.

Yet, somehow, there is beauty here. There is light. Patches of glowing moss cling to the surface of the lake like skin on a bucket of milk, giving off an eerie iridescence that is peculiarly comforting. The reflection of shimmering mushrooms in the green water is oddly lovely. The vast stillness of the water and its frozen, rocky sky are somehow enchanting. The Foundations of Stone grant visitors a glimpse of a rare and terrible aspect of Middle-earth. [1]

There are also remnants of the Dwarves who delved so deeply here so long ago - their camp, The Shadowed Refuge. The base of the Endless Stair sits here, spiraling upwards towards the pinnacle of the mountain's peak far above in Zirakzigil. A piece of the Arch of the Bridge of Khazad-dûm juts upward from the island in the middle of the lake where it fell from far above.

See "list of NPCs" within the Foundations of Stone

The Foundations of Stone Creatures 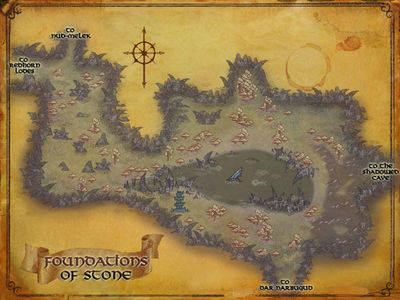 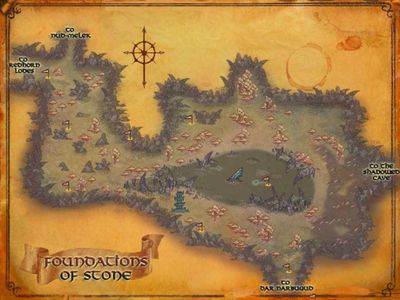 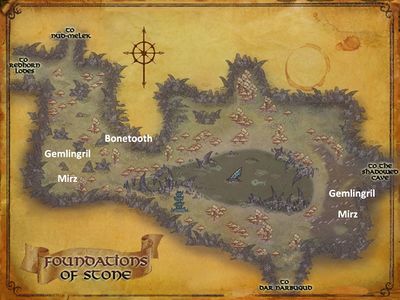