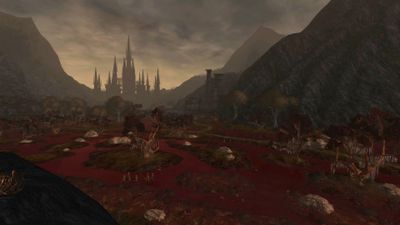 Agarnaith (Sindarin for Bloody Gore) is an area within the Plateau of Gorgoroth.

This valley east of Orodruin, between Dor Amarth and Talath Úrui, is one of the most dangerous places in Gorgoroth. It is filled by a dense, pestilent, and bloody swampland, at least part of which is named Grishbalt. The swamp and the valley walls are inhabited by diseased beasts, insects, and Orcs. Even the plant life is twisted by plague, spewing red saps and vile spores.

Agarnaith's blighted nature is apparent everywhere one looks, but the environment is relatively less hostile in the west, near the road. There can be found mostly diseased boars, wolves, crows, mole-rats and swarms of tiny insects. Beyond Viznak's Hideout in the middle of the swamp, much larger sickle-flies, nerbyg, and slugs can be found. The swamped remains of a forest blankets the inner stretch of the Bloody Gore, and some of the trees and their tenders attempt to crush and drown any intruders.

The mighty fortress of Seregost, citadel of Lhaereth the Stained and her Stained Merrevail, dominates the land and blocks access to the even more deadly Mokál Rukh beyond. Guarding Seregost is the lesser stronghold of Kala-gijak, held by Uruks.

Locations found within the area of Agarnaith are listed below.

See Category:The Plateau of Gorgoroth Settlements for more settlements nearby.

These landmarks are located within Agarnaith:

See Category:The Plateau of Gorgoroth Landmarks for more landmarks nearby.

See Category:The Plateau of Gorgoroth Interiors for more interiors nearby.

See Category: The Plateau of Gorgoroth Instances for more instances located within the same region as Agarnaith.

Parts of The Black Book of Mordor: Where the Shadows Lie (Requires purchase of the Mordor Expansion.) 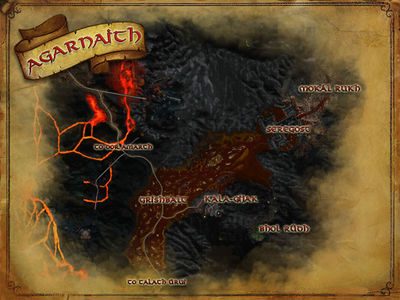 This place was once known as the Broken Vale, and was where Sauron constructed the Blood-fort of Seregost for Lhaereth the Stained, the Lady of Blight, as a reward for her loyalty. At Sauron's bidding, Lhaereth brewed and bred her plagues and poisons in her fortress and among the woods of the vale, slowly poisoning the land. Her miasmas spread among the creatures and plants, tainting them all, and even the Chaydash river that flowed through the valley ran red, forming a bloody swamp. Thus the Broken Vale became Agarnaith, the Bloody Gore.[1]

Sauron's defeat has not stopped her work. Indeed, though she participates in resulting power struggle, Lhaereth still works on something to make Gondor pay for her master's demise.[2][3] This advice is offered to all who adventure on behalf of the Conquest of Gorgoroth: "One thing is for certain, do NOT stop to smell the flowers here as it might be the very last thing you ever do."[4]

There are not only evil and diseased creatures inhabiting Agarnaith, however. The tumults of the Dark Lord's fall have broken the long isolation of a most curious community: a hidden village of Drúedain. These Woses are the Red Sky Clan, and now they and their home of Bhol Rûdh are no longer sealed off from the Bloody Gore.[5][6]