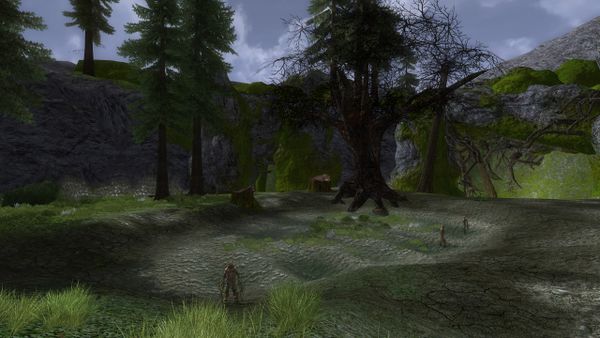 Tucked up in the hilly forests above the shores of Lake Evendim, this shallow pool of water amidst a clearing of trees has long been considered a place best avoided. In recent days, these superstitions would prove wise, as nature itself has become corrupted and given birth to a host of wood-trolls who further desecrate the grove in the name of a force even more sinister.

Deepest within the grove is a cave that may hold the answers to what has caused such terrible creatures, and in that cave a quest instance takes place.

These deeds can be advanced by exploring the Twisted Grove:

The Twisted Grove is a dark and foreboding place, set in the deepest wilds west of Lake Evendim. Even during the reign of the Kings of Arnor, it was considered an unlucky place and was avoided by most. Now it seems certain that an unwholesome power is at work here, and the very trees seem to radiate a malice towards living things that intrude upon their dark solitude. — Deed