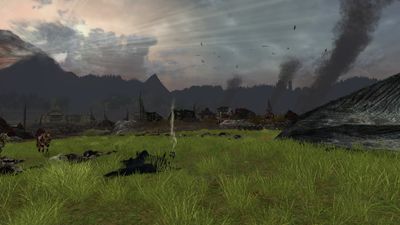 Kings' End is an area of Old Anórien, representing the Battle of Pelennor Fields at early morning, just before, during, and after the deaths of the Black Serpent, the Witch-king of Angmar, and Théoden. It is first accessed during Epic Volume IV. Book 6, Chapter 2: Death Comes for All. Completing Book 6, Chapter 4: The Foe Resurgent unlocks the next phase of the battle, Riders' Stand. A horse To Riders' Stand will appear next to the first horse.[22.3N, 14.2W]

Kings' End is the 2nd stage of the Battle of Pelennor Fields and contains two World Instances found in the Instance Finder panel and two quest instances:

The groups of fighters cannot be interacted with, but many Orcs and Wargs have broken free of the ranks and can be fought.

Once unlocked, this phases of the battle can be reached from: 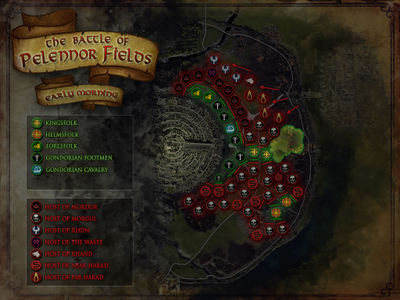 The Rohirrim press the attack, coming up against Haradrim forces led by Kâlach Hûl, The Black Serpent. A small fellowship of heroes fights their way through Orcs, Variags, and Haradrim to reach the Black Serpent and slay his sons, the Princes of Harad.[1] Théoden King charges in to meet the Black Serpent, and cuts down both him and his banner. With their king's death, the Haradrim are greatly demoralized.[2]

But in the midst of this glory, the Witch-king of Angmar descends on Théoden and his knights. Guthláf and Déorwine and several other knights are killed, and Snowmane is hit by a dart and falls on his rider, mortally wounding him. The dying King of the Mark is defended by Dernhelm, who confronts the Witch-king and reveals "himself" to be Éowyn. The Witch-king breaks her shield and her shield-arm with one swing of his great black mace, but before he can deal a killing blow, he is stabbed in the back of the knee by Meriadoc Brandybuck. As he topples forward, Éowyn stabs him through the head, and he dies, leaving his hauberk and mantle empty. Théoden lives long enough to proclaim Éomer King. When Éomer sees his sister on the battlefield unexpected and apparently dead, however, he leads the Rohirrim in a charge to the south, deep into the enemy ranks.[2]

Meanwhile,[note 1] Steward Denethor succumbs to despair and attempts to have himself and Faramir burned alive in Rath Dínen, the Silent Street. Beregond, Guard of the Citadel, leaves his post to prevent this, and is forced to kill the porter guarding Fen Hollen. Peregrin Took and Mithrandir come after.[3] With the Fen Hollen open and unguarded, enemies of Gondor descend on Rath Dínen. Lintanar, another member of the Citadel Guard, has joined the Withered Tree and leads a mob of them in this opportunity to confront the Steward. The Gloom of Nurn also comes, to raise the dead of the Hallows and to reclaim Eärnur's crown for Gothmog. These villains are thwarted and Faramir is saved, but Denethor succeeds in burning himself.[4]

Elfmar, son of Elfhelm, fights with renewed vigour in vengeance for his king, but is slain by the Olog Thrúgrath. The procession bringing the bodies of Théoden and Éowyn into the city is attacked by another Nazgûl, but Mithrandir arrives in time to drive it away.[5] Reeve Fastred and the Riders Three unite to confront Crúmgam and his agent, the Rohirrim traitor who murdered Léofdag. The Riders have their vengeance on the traitorous knight Brodwulf, but Crúmgam kills Fastred and escapes yet again.[6]

Despite the death of the Witch-king, the forces of the Enemy continue the attack, and reinforcements pour from Osgiliath. Reeve Ingbert wishes to learn who now commands them, and moves to reunite with Éomer on the Hillock. On the way he encounters Duilin and Derufin of the Blackroot Vale, but the brothers are trampled in their attempt to shoot out the eyes of three Mûmakil. Finding the Woe of Khand on the way to the Hillock, Ingbert turns aside to come to the aid of Prince Imrahil and his Swan-knights, who are battling Haradrim who have been enraged by their king's death. The Reeve and the Prince continue to Éomer together, only be confronted by Orolang, a Cargûl and Knight of Eärnur. The wraith proclaims Gothmog the King returned, but is defeated and Imrahil does not heed his words.[7][8]

Spotting enemies approaching the breached Great Gate, Prince Imrahil parts from Reeve Ingbert and returns to the gate. Directed by the Prince, a party of Gondor's allies takes to the field to counter this new assault from Osgiliath, and they defeat many mighty foes. Among these are another great Olog, Rakothas, the brother of Thrúgrath; Set-Akâji, Arpong-Dôkh, and Kû-Nerpag, the Mûmakil who killed the sons of Duinhir; Vadokhar, a Rogmul summoned by the High Sorcerer of Harad; and the Unbroken One, a Nameless horror brough to the battlefield by Black Númenóreans of Minas Morgul. They then face the High Sorcerer of Harad, the Woe of Khand, and Gothmog himself. Though they banish the Nazgûl and succesfully stand against Gothmog, the wraiths cannot be slain.[9]