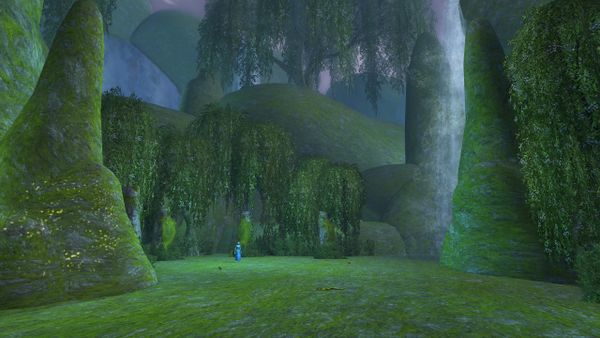 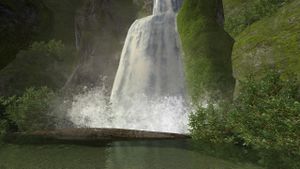 Behind the roaring waterfall throwing itself into the Rushingdale, near Lake Evendim, lies this tranquil cave. Its peacefulness is almost supernatural. Jumping from rock to rock, guided by the lit of mysterious crystals while cautiously bypassing the small frogs and snakes, visitors suddenly face Gwindeth, a mysterious water nymph who dates herself to ages long since (Gwindethrond is Sindarin for Halls of Gwindeth).

These harmless creatures are encountered at this location:

"Deep within the folded lands along the shores of Nenuial, known to most as Lake Evendim, lies a grotto, its entrance hidden behind a waterfall – but this is no ordinary cave, for it is home to Gwindeth, the Blue Lady of Evendim. Who or what she is remains a mystery, but she has dwelt at Gwindethrond for many an age, and was a friend to the Kings of Arnor, from Elendil to Amlaith of Fornost, the first King of Arthedain. Some believe she is kin to the River-maidens – though her temperament is much stronger than theirs – or perhaps even one of the messengers of the Valar who chose long ago to remain in Middle-earth.

"At the behest of Amlaith, Gwindeth placed under her protection the last of the Silithair, gems of surpassing beauty and power crafted by the Elves. Aragorn, son of Arathorn, came to Gwindethrond to seek the Silithar, but Gwindeth turned him aside. Aragorn still hopes that the Silithar can be recovered, for its power will be needed to help drive back the Shadow in the East." — lorebook