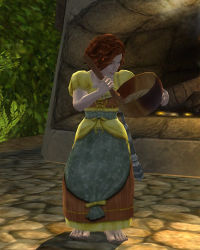 "A long march can be made all the easier with the promise of a good meal at the end. While it may seem a mundane talent, a good cook is every adventurer's best friend!"

Cooking is essential for the survival for all peoples of Middle-earth - but especially Hobbits. Any adventurer can tell you that travelling with Hobbits can be a tiresome task if proper meals have not been provided! However, no matter what your race, a cook can provide food that can help you recover from setbacks like wounds and diseases, increase your Power and Morale regeneration in and out of combat, and even give boosts to your Might and Vitality, or other characteristics.

A guide to attaining Cook Mastery.

A list of all component items that are used to craft Cook recipes: Cook Components

NPC Vendors do not sell crops: fruits, vegetables, grains, and tea leaves. These items must be crafted by/obtained from a player character. A Yeoman (a cook who is also a farmer and a tailor) will be able to grow these cooking ingredients using his farming profession, or find them using the Track Crops skill while adventuring. A Tinker (a cook who is also a jeweller and prospector) is not so lucky; he will need to obtain his crop ingredients from another player that has the Farmer profession.

These items may be cultivated by Farmers, using a Vegetable field crafting area. They are used by Cooks in crafting food. Cultivating a well-tended field of vegetables (a Critical success result) may also produce special by-products that can be used by Cooks to create special or improved food recipes, or by Scholars to create dyes. Note that locations in the following table are where the crops are commonly found; all wild crops may be found, at times, in all areas of Middle Earth. Critical result crops used for dyes may be seen in the Dyes table.

These items may be cultivated by Farmers, using a Grain field crafting area. They are used by Cooks in crafting food and drinks. They are never found in the wild.

* NOTE: Most of these dye plants may drop randomly in a Westfold Farmer's Wild Flower Field, including those that can't otherwise be cultivated. Note that the Tier column in the table above refers to the farming tier at which the item is cultivated, and the cooking tier at which the item is introduced. However, crops may also be used for higher tier recipes. For example, Winter Barley is produced by a tier 4 (Artisan) farmer, and Winter Barley Flour is first used by a tier 4 cook to make Chicken Barley Soup, but it is also used in tier 5 (Master) to make Cream of Barley Soup, and in tier 6 (Supreme) to make Lamb and Barley Soup.

To critically succeed while crafting an item, a Cook must have achieved proficiency in the crafting tier for that item. After gaining proficiency, the base chance to achieve critical success is 5%.

Spices are special, rare crop ingredients that can be used by a cook to improve the flavor of food, producing critical results. They are infrequently produced in fields of other crops from the same tier (e.g. a Tier 1 Sprig of Allspice can be harvested from any of the other Tier 1 fields, such as carrot and mushroom fields). They can also be rewarded as loot from foes; the spice received is determined by the level of the foe that was defeated.

A complete list of Cook recipe indexes by tier:

An index of items that can be crafted using Cook recipes

Cooks of all levels are eligible to join the Cook's Guild, but the guild recipes require Expert tier and above. To join a crafting guild one must first speak to a Master of Crafting Guilds, and they are always found in the vicinity of a guild hall and at many other locations. Then, travel to Michel Delving's Craft-fair in the Shire and speak with Guild Leader Aesseledh to continue the quest. The Cook's Guild Hall is found at the south-western corner of the craft-fair.
NOTE: since Update 27, players may find the guild NPCs located in the House of Craft in Minas Tirith (Midsummer) [23.2N, 54.9W] to be preferable to Michel Delving, especially since a Cook's second guildable profession -- Tailor for Yeoman or Jeweller for Tinker -- can also be guilded in the same location in Minas Tirith (Midsummer), thus obviating a separate trip. Minas Tirith (Midsummer) is available to characters of all levels. At Minas Tirith (Midsummer), the repast (Reputation Item) recipes are purchased from the Guild-leader; there is no separate NPC for guild-reputation-item recipes, as there is in other locations. The only downside of Minas Tirith (Midsummer) is that the "Introduction" quests for each guilded profession cannot be turned into the Guild-leader, since those quests require a specific named NPC, who does not reside there.