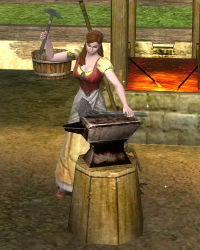 "As the name would suggest, the Weaponsmith is the primary source of melee weapons. Swords, daggers, and axes of all varieties are the Weaponsmith's purview, ranging from bronze training gear to mighty weapons of ancient design and great renown."

A hero without a weapon is ineffective against the forces of evil. A Weaponsmith can craft metal weapons using bronze, iron, and steel. These include axes and hatchets for throwing in ranged attacks as well as the melee weapons: maces, halberds, daggers, axes, swords, and greatswords. Weaponsmiths can also craft specialized burglar trick weapons like marbles, and caltrops; as well as shield-spikes for Guardians and Wardens.

A guide to attaining Weaponsmith Mastery.

A list of all component items that are used to craft Weaponsmith recipes: Weaponsmith Components

Weaponsmiths primarily use metal ingots that are crafted by a Prospector. The Armsman vocation has both professions and will be able to mine, smelt and refine ore into usable ingots on his own. Historian vocation Weaponsmiths do not have this ability, and will always need to find a Prospector to supply ingots for smithing.

In addition to metal ingots, Weaponsmiths will also use:

A complete list of Weaponsmith recipe indexes by tier:

An index of items that can be crafted using Weaponsmith recipes

Weaponsmiths of all levels are eligible to join the Weaponsmith's Guild, but the guild recipes require Expert tier and above. To join a crafting guild one must first speak to a Master of Crafting Guilds, and they are always found in the vicinity of a guild hall and at many other locations. Then, travel to Ered Luin and speak with Guild Leader Cottar Tunnelly to continue the quest. The Weaponsmith's Guild Hall is located in the eastern wall of Thorin's Hall - The Forging Hall.
NOTE: since Update 27, players may find the guild NPCs located in the House of Craft in Minas Tirith (Midsummer) [23.2N, 54.9W] to be preferable to Thorin's Hall, since the crafter's second guildable profession -- Woodworker for Armsman or Scholar for Historian -- can also be guilded in the same location in Minas Tirith (Midsummer), thus obviating a separate trip. Minas Tirith (Midsummer) is available to characters of all levels. At Minas Tirith (Midsummer), the emblem (Reputation Item) recipes are purchased from the Guild-leader; there is no separate NPC for guild-reputation-item recipes, as there is in other locations. The only downside of Minas Tirith (Midsummer) is that the "Introduction" quests for each guilded profession cannot be turned into the Guild-leader, since those quests require a specific named NPC, who does not reside there.

Named Expert Weaponsmith NPCs. There are numerous unnamed ones.