This page is about the zone in the land of Mordor. For the stronghold of Morgoth, see Utumno. 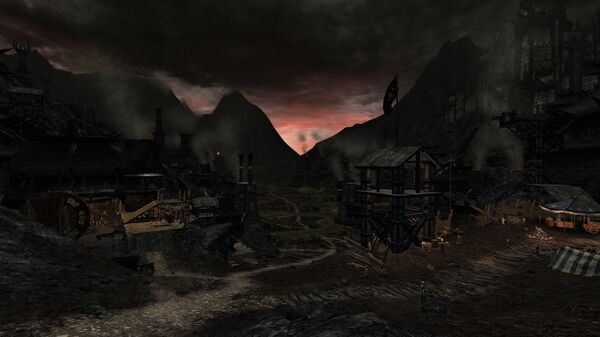 Udûn (Sindarin for Hell or Underworld, literally Deep-hidden) is an area within the Plateau of Gorgoroth.

Udûn connects Gorgoroth to the lands beyond and is thus sometimes called "Mordor's antechamber". This polluted valley holds the great forges, quarries, and parade grounds that readied Sauron's armies for war.

It lies between Cirith Gorgor and the Morannon in the north-west and the Isenmouthe in the south-east. The castle of Durthang overlooks Udûn from the mountain spur in the south-west, while across the valley the great foundry of Anglach stands on the inner face of the Ered Lithui.

Locations found within the area of Udûn are listed below.

See Category: The Plateau of Gorgoroth Settlements for more settlements nearby.

These landmarks are located within Udûn:

See Category: The Plateau of Gorgoroth Landmarks for more landmarks nearby.

See Category:The Plateau of Gorgoroth Interiors for more interiors nearby.

Most creatures in Udûn are of levels 106-108, however there are a few areas inhabited by level 115 creatures. These areas are mostly penetrated during Allegiance quests. Similarly the Fortresses have level 115 Mobs when they are entered for Resource quests, and the lower level when entered normally. 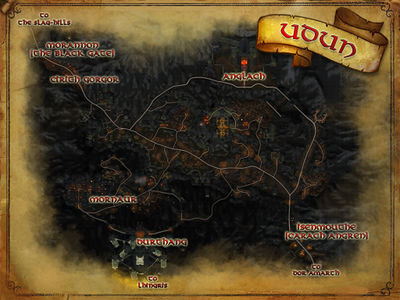 Udûn was the Sindarin name of the fortress of the first Dark Lord in the far north of the World. It was the first and greatest of his citadels, delved in the earliest days, the home to hosts of demons and monsters. From Udûn, the Dark Lord troubled the world for millennia. From there, he drove the Valar out of their dwelling-place in Middle-earth, and into the West. At the time of the awakening of the Elves, though, the Valar attacked Udûn in full force, and destroyed it utterly, carrying its master back to Valinor as their prisoner.

Udûn also appears as a name for the northern valley of Mordor that lay behind the Morannon. No doubt Sauron chose this name in memory of his ancient master's greatest stronghold [1] Udûn is also translated as "hell" and is said to have been beneath Thangorodrim.[2]

In the Second Age, it is believed, Sauron here ordered the construction of mines, forge-works, and parade grounds for the building of an army against the kingdoms of Men and Elves. He also discovered strange ores, with which he developed Morgul-steel, a secret alloy with dark enchantments. The knife Gulthauk and Mormagáth the Shadow-hammer were the greatest of the Morgul-weapons, so the Dark Lord took them for himself.[3]

After the Last Alliance of Elves and Men breached the Morannon, Sauron's forces quickly retreated through Udûn to make a stand their Barad-dûr. The Last Alliance destroyed what works they could along the way, but forwent a thorough clearing of the valley in favour of pursuing the enemy host. Seven years later, after the victory of the Last Alliance, Isildur, King of Gondor, returned and ordered the building of Durthand, the Black Shield.[3] This fortress was held by an order of Gondorian sentinels called the Thandrim. The Thandrim maintained their vigil for at least sixteen centuries, but eventually Gondor lost its hold on Mordor.[note 1] Ugrukhôr, Captain of the Pit, claimed Durthand and renamed it to Durthang, the Dark Oppression, in mockery of its original name.[4] He restored and extended the fortifications and foundries of Udûn, and at this time Anglach and Mornaur were built.[3]

Following Sauron's demise, the various forges, foundries, weapon halls, and smelteries constructed in the valley of Udûn have been left in shambles, with acid pools and waste left free to pour out onto the landscape. Foul orc villages and encampments clutter along the roads, as they prepared for the Host of the West. Slaves that survived the initial quakes and blast of One Ring's destruction still work away, not knowing the liberation that awaits them. Yet, many ancient curses and hidden evils still lie within the tall strongholds of Durthang and Anglach, waiting to pour out onto careless explorers seeking to pillage the once mighty war-machine.[5]

Ugrukhôr still lives, and his forces still oppose the Conquest of Gorgoroth. He is one of the Gúrzyul who are competing for power after their master's demise.[6]