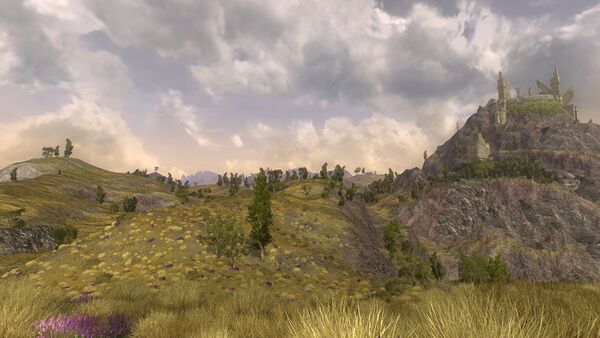 The Weather Hills is an area that spans over both Bree-land and the Lone-lands.

This is a vast and dangerous area of hilltops mainly north-west of, and including, Weathertop. Here boars, crebain, wargs, and wolves are roaming, mixed with goblin and orcs. Adventurers will never know what hazards hide behind the next rock.

Numerous ruins mark the former presence and realms of Elves and Men, and these are well worth a visit. The most notable location is Weathertop, or Amon Sûl, nothing within decent range can match its height. Any traveller is moved by its fashion and power, yet it is ruined. Recently, curious events took place at Weathertop and around this perimeter. Thus, a Ranger named Candaith has set up a safe camp with a Camp Site Fire and a swift horse. From there, he is helping adventurers on epic and other quests.

Many quests involving the Weather Hills are given at the Forsaken Inn, which serves as a good base for adventurers. 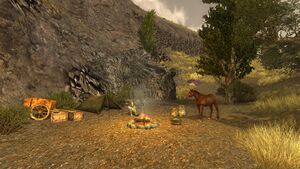 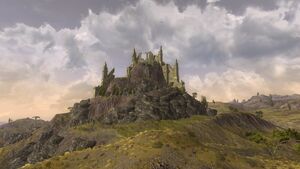 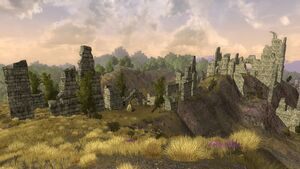 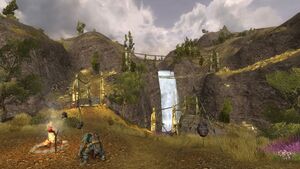 See "starting quests" and the landmarks for more quests
Starting in Bree-land:

Starting in the Lone-lands:

The name among Men for the north-south range of hills that lay in central Eriador, and in ancient times marked part of the border between the lands of Arthedain and Rhudaur. Weathertop, or Amon Sûl, lay at the southern end of the range.

The most notable location is Weathertop, which is mentioned in Tolkien's works and dates back to before II 3320. While this area is dotted with ruins, none of them may be safely dated further back than early c. III 1300 when Argeleb I, the seventh king of Dúnedain, fortified this area in an attempt to return Arnor to its former glory.

While the Weather Hills are not mentioned by name in Tolkien's works, they are referred to and described, usually in connection with Weathertop. It was through these hills that Strider brought Frodo and his companions during their escape from Bree, when Gandalf chose the quicker Great East Road, and they ran past each other. Now Candaith watches over the ancient relics as a valiant Ranger of the North who hallows this formerly glorious tower.