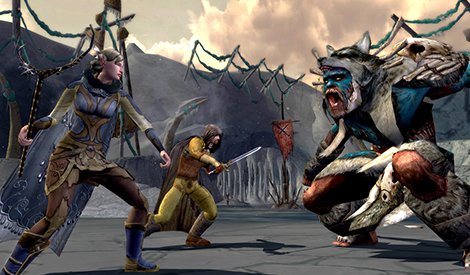 The Icy Crevasse is a skirmish located within Jä-kuru, in Forochel.

"A powerful sorcerer from Angmar seeks to drive the frozen winds of Forochel south into Evendim, freezing the lake and allowing a great army to march on Tinnudir...."

This skirmish can be started for the following groups:

For all possible skirmish lieutenants, see the page Skirmish Lieutenants.
The following mobs are encountered within this skirmish:

Fight through the canyons. Each canyon is barricaded with a massive wall of ice crystals that will melt when capturing each flag. In each canyon there are steam vents that will give a bonus effect, +50% Outgoing Healing and +50% Incoming Healing, fight on top of them to use them to the your advantage. Once defeating the end boss, use the sled to exit the instance.

This is a dual boss fight but most of it Guinokh and Malgen will fight once at a time.

In the boss room, there will be vents that give +50% Outgoing Healing and +50% Incoming Healing. These vents bestow this effect and replaces the Winds of Forochel effect. If working on one mob, it is beneficial to have the mob on the vent so that it will not have the +50% Damage buff while retaining the damage buff. This is a bit harder to do when packs of mobs spawn in groups for Small Fellowship and above.

Don't forget to loot both boss corpses, if they remain. The Fancy Wooden Chest will show up after you get the flag. Completing the skirmish will increase the character's standing with the Lossoth of Forochel faction.