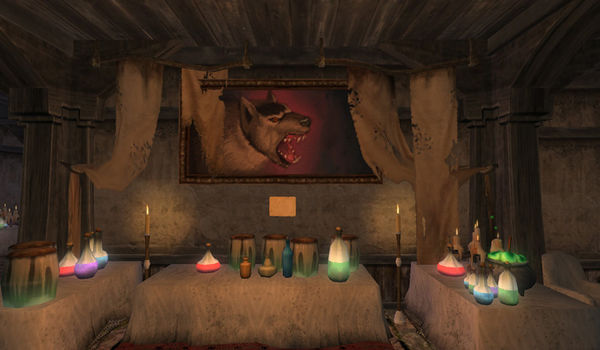 The Haunted Burrow is a spooky, fun-filled house of scary sights and sounds. It is only available during the Harvest Festival and accessible after completing the short quest series starting with A Cellar Door Appears and ending with The Haunted Burrow. Along with daily quests which reward Fall Festival Tokens, there are many other hidden surprises to be found within!

The Haunted Burrow was introduced during the Harvest Festival of 2010.

The Hobbits of the Shire just wanted to add another oven to the kitchens at the Party Tree, but they dug up more than they bargained for! Every Hobbit in Hobbiton is talking about what may lurk in the dark and twisty tunnels that run beneath Bag End. Did crazy old Bilbo hide his treasure there? Did he leave anything to guard it? Some even whisper that Gandalf put a curse on the place to keep the nosy neighbors away — but that wouldn't stop a brave adventurer from trying to find out! But beware, in the Haunted Burrow, things do go bump in the night! 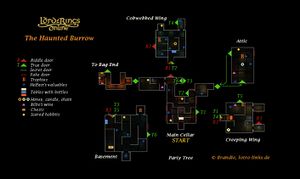 The Haunted Burrow is made up of a Main Cellar (center portion of map) and 4 wings:

Some doors in each wing send you back to the beginning of the wing, instead of exiting you. Also, there are certain doors that are locked unless you have the quest A Riddle in a Bottle. This quest is not only timed, it requires that you travel through those specific doors instead of taking your usual route through the burrow.

Treasure Hunting in the Burrow

There is a fifth wing that you can find in the burrow although no quests will take you there. You will find it behind the "Mystery Door." This takes you to a brightly-lit, well-decorated section of the burrow, that also connects to Bag End. In a side room there are three chests containing bonus Fall Festival Tokens and occasionally, other Harvest Festival drops. These chests can be opened once per hour, and opening them will give the character a debuff icon to count down the time. The door exiting from the burrow is one-way, and leaves the character just inside the entrance to Bag End.

The basement contains the real treasure in the Haunted Burrow. A "Poorly Hidden Chest" (stashed behind a secret door that looks like a stack of barrels, just after you enter the Basement), will yield several Fall Festival Tokens and an assortment of other festival goodies, such as one-shot consumable "tricks", and the occasional "treat" like a painting or cosmetic piece. This chest is where the ultra-rare Painted Skeleton Steed can be found, although the drop rate is extremely low. After using the chest, the character will get a debuff icon lasting 24 hours (real-time), during which time the Poorly Hidden Chest cannot be opened again. 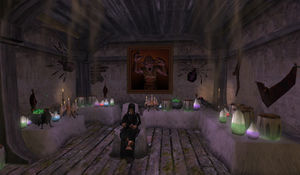