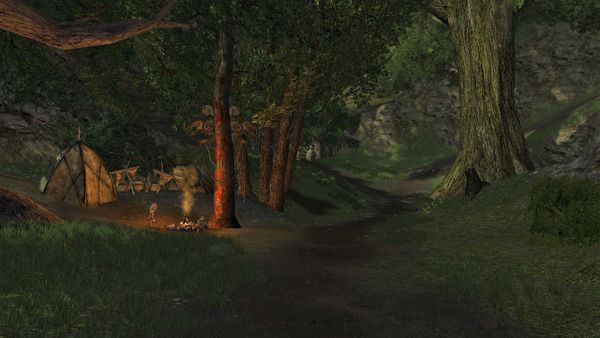 The entrance to this very large goblin camp may seem harmless but behind the first goblin guards the trail winds on and there are several smaller camps within. Midway the trail, to the west and behind an open gate, is the entrance to "Lubach's cave" (see below). Eventually the trail ends with a marvellous view over Evendim.

All the time since Bullroarer decapitated Chief Golfimbul, more than 270 years before current Lotro era, no goblins have been seen in the Shire. However, recently some hobbits have reported seeing these creatures who seem to have set up this camp unnoticed. 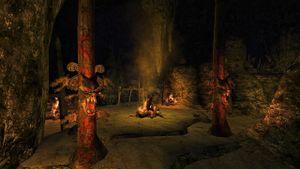 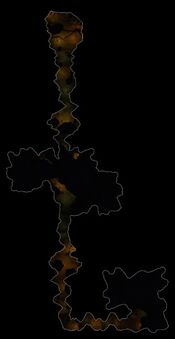 Lubach's Cave is also known as Greenfields Warren is found halfway up the winding trail through Golfimbul's Hole, past an open gate to the west into an open area that is guarded by goblins. Behind a door at the northern wall is the entrance to the warren, but the door is locked unless having the quest Prologue (Hobbit): Goblin Foothold.

The warren is patrolled by Gramsfoot goblins and winds itself down to a "throne room" where Lubach holds court.

Because the developers have made a good work with the warren it is sad that it is restricted to a once-in-a-lifetime quest (available to all races though).

Golfimbul's Hole takes it name from the legendary goblin leader, Chief Golfimbul. In TA 2747 (about 270 years before current Lotro era), Chief Golfimbul lead a band of goblins from Mount Gram to invade the Northfarthing of the Shire. Bandobras "Bullroarer" Took lead a force of hobbits against the invading goblins in what would become known as the Battle of the Greenfields.

"During the Battle of the Greenfields, Bullroarer Took charged at Golfimbul and knocked Golfimbul's head off with a swing of his club. Golfimbul's head flew the air, then rolled into a rabbit hole. According to hobbit legend, this is the birth of the game of golf." — The Hobbit, by Tolkien

"Gramsfoot goblins have never forgotten their defeat at the hands of the Shire-folk, and have recently established this camp to seek revenge. A goblin leader by the name of Lubach is under the sway of an evil Man from Angmar, and believes that he is the heir of legendary goblin chief Golfimbul. Lubach is holed up inside a cave system in Golfimbul's Hole". — Quest