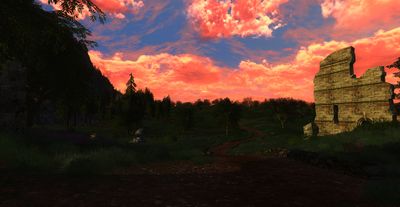 Eastfold is an area within West Rohan.

Among the oldest Ridings in the Mark, Eastfold lies on the edge of Gondor, across the Mering-stream and is nestled against the White Mountains to the south. Eastfold has seen little of the destruction wrought by Saruman, due to being located on the far side of the realm from Isengard. Still, Eastfold is vulnerable with many of the Rohirrim being called to defend the Hornburg. Long thought destroyed and starved for vengeance, the Orcs of the White Mountains stir once more through Sauron's dark will.

The lands of Eastfold fall into three areas: the rich farmlands of the Folde, the swampy marshes of the Fenmarch and the thickly forested hunting grounds of the Everholt.

Rich with history, Eastfold is home to the former capital of Rohan; Aldburg. While still maintaining an air of majesty, Aldburg has become overgrown and rundown. The few that remain are prepared to defend their home at all costs. A new threat with ties to Eastfold’s past has recently made its presence known. Outside help is needed to combat this threat and to keep Eastfold’s beacon of hope shining bright.

Eastfold's lands divide into three areas: the Folde, the Fenmarch, and the Everholt. The Folde is rich farmland that has long served the realm. The Fenmarch blooms with wildflowers, tussocks, reeds. Everholt is an old oak forest and royal hunting ground running uphill to the White Mountains.

Home of Éomer, Third Marshal of the Riddermark, Eastfold is among the oldest Ridings in the Mark; it was the seat of Eorl the Young when he first became King. The capital moved to Edoras during the reign of his son Brego, but the Eastfold remains the site of many important moments of Rohan's history.

These landmarks are located within Eastfold:

Other points of interest 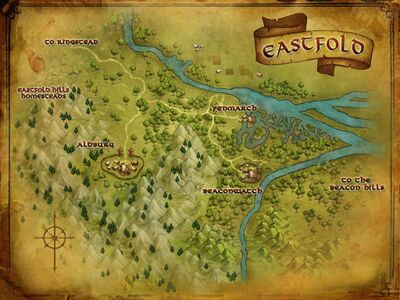 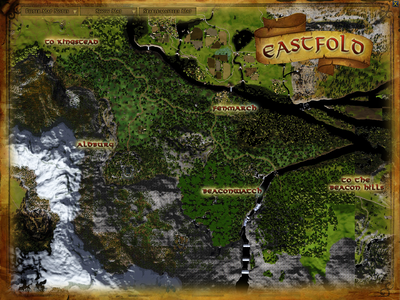 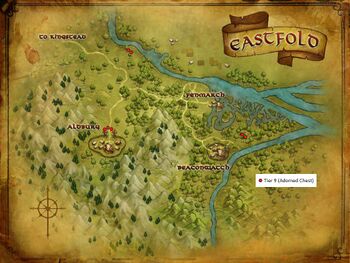