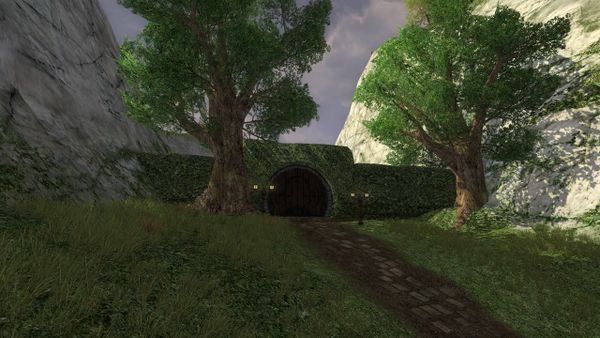 This closed gate is located at the extreme south-west corner of the Shire towards the Far Downs, south-west and uphill of Michel Delving, beyond Andfast Tunnelly, the stable-master.

The Downs Gate is the last hobbit-built structure travellers see before journeying south-west into the Far Downs. Unlike the other two Shire-gates, Downs gate stands closed, and does not let travellers through into the lands beyond, the others being Southfarthing Gate and the Rushock Gate which leads to Ered Luin.

Much later in history, it was probably through Downs Gate the following took place:
"... filled with a sadness that was yet blessed and without bitterness, rode Sam, and Frodo, and Bilbo, and the Elves delighted to honour them. ... And when they had passed from the Shire, going about the south skirts of the White Downs, they came to the Far Downs, and to the Towers, and looked on the distant Sea; and so they rode down at last to Mithlond, to the Grey Havens in the long firth of Lune". — The Return of the King, by Tolkien