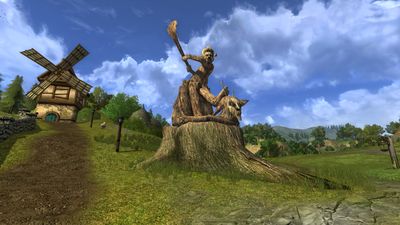 The statue of the Bullroarer is a point of interest in Brockenborings in the Shire. [27.2S, 67.7W]

This statue depicts the hobbit hero Bandobras "Bullroarer" Took after he defeated the goblin chief Golfimbul in the Battle of the Greenfields.

Born in TA 2704, Bandobras Took was the second son of the eleventh Thain of the Took family line, Isumbras Took III. Known as the Bullroarer, Bandobras is the greatest hero in Hobbit history. He was the tallest Hobbit on record until he was surpassed in height by Meriadoc Brandybuck and Peregrin Took. At over 4 feet tall and was able to ride a horse (not a pony as is typical for Hobbits).

Bandobras was given the nickname "Bullroarer." From him were descended the North-tooks of Long Cleeve, where Peregrin Took's wife Diamond of Long Cleeve came from. Bandobras died in TA 2806.

Battle of the Greenfields

In the year 2747 of the Third Age, a band of goblins from Mount Gram lead by chief Golfimbul invaded the Shire. They were met and confronted in the Greenfields by Bandobras "Bullroarer" Took and a force of Hobbits. Bandobras personally averted the invasion when he beheaded the goblin chief with a swing of his club. When Golfimbul's head rolled into a rabbit hole, the game of Golf was purportedly invented.